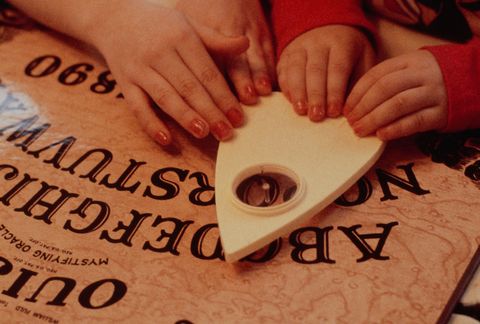 Ouija boards have captivated people for decades because of the game's claims to be in cahoots with the beyond. Though plenty of people have witnessed nothing but their friends moving the planchette around themselves, others say playing with an Ouija board is like playing with some seriously unwieldy fire—you never know when shit's going to get out of control. Below, eight spooky tales that might put you off the Mystifying Oracle forever.

1. "I Can See You Through the Window"

"I was about 12 or 13 spending the night at a friend's house, goofing around with the Ouija board with him and his sister. We were getting all sorts of gibberish plus words spelled out, just kind of scaring ourselves for fun, not taking it very seriously. Then we got the message 'I can see you through the window' and then 'I can see you through his eyes' or something like that. There was just a small window in the basement room where we were, and just the backyard and woods past the driveway visible through that window. We asked it more questions and it said 'I'm under the car,' so we somehow got up the nerve to go out with a flashlight and peer under the car, where we saw a huge black stray cat hissing. We ran inside freaking out, and at that exact moment, the power failed and all the lights in the house went out. We just about actually shit ourselves. Few minutes later, the power came back, and we sat up until dawn that night scared and never played with the board again." —Reddit user no_springs

"My two best friends (M and L for this story) and I played [the Ouija board] at M's house. It was going fine until M asked the spirit how it had died and it said 'murder.' She asked how it had been murdered and it said 'not I.' It gave its name as something older that I can no longer remember and gave us a date in the 1800s. It started to get heavy. The whole room felt different, and the little thing on the board was ripped out of our hands and went across the room. We stopped playing immediately after that. M's mom died of cancer a week later. Very suddenly, nobody knew.

"Probably a coincidence, but L's mom was hospitalized for a serious drinking problem not long after that and then mine had an emergency hysterectomy the same week. I have since then experienced things that I don't think I would have without this experience. Voices, a dark shadow, footsteps ... I wonder if I'm haunted sometimes still and it's been nine years." —Reddit user turtleshellmagic

"I was over at a friend's house back in the early '90s. I believe I was in ninth grade at the time. There were four of us — myself and three other girls. They kept asking me if I wanted to play with the Ouija board because they've been talking to some dude on it named Roger. I was totally skeptical at first. I wasn't buying it ... Totally thought they were moving [the planchette], until I asked the board a question that only I knew. We had just got our grades from school back that day and I asked it what I got in science. I remember this clearly, and I know my friends did not know the answer. The board spelled out my grade. Of course, that piqued my interest so I started asking it more questions.

"I can't really recall the details of that night other than the board kept calling one of my friends a bitch — it hated her. It liked me. His name was Roger and he was stabbed to death. At one point I was the only one controlling the board and asking questions. It worked. The freakiest thing that's ever happened to me ... I'm not super spiritual, have never seen anything else paranormal-related, and feel that I'm a very rational person. All I know is something supernatural was controlling that board without a doubt." —Reddit user ouija1993

4. The Case of the Vanishing Board

"We were hanging out in a friend's dorm room and busted out the Ouija board. There were a few of us who had used them before and a few who hadn't that were quite skeptical. It was about 11:00 p.m. and the communication with the board was going quite well. Gary, one of the skeptics, kept calling bullshit to the whole thing. We convinced him to sit on the floor with us and give it a shot. His first question, 'Is this for real or just a bunch of bullshit?' The planchette zipped to NO. 'Fine' he says, still not believing, 'Prove it!'

"No sooner [had] he finished that statement [when] the lights in the room flickered and the building's fire alarm went off. This freaked us all out and we left the room to follow fire alarm procedures. After about 20 minutes, campus safety said it was a false alarm and let us all back in to the dorms. When we arrived back up to [our friend's] room, the Ouija board was gone. No one took it with us and the room was left locked." —Reddit user hammerhands

"I got an Ouija board for Christmas when I was in sixth grade (great Christmas present, huh?). That night, I went over to my best friend's house and brought the Ouija board with me. We went up to her room, set it on the floor, and asked, 'Is there anyone in the room with us?' The [planchette] spelled out 'Ruth' which was my grandma's name and her great-aunt's name. Both my grandma and her great-aunt had died that year. We threw the board back in the box and were totally freaked out. I brought it home and put it in my closet, but every time I looked at the box, it gave me this horrible, creepy feeling, so I ended up throwing it in the Dumpster a couple years later." —Reddit user beatleape

6. The Spirit in the Corner of the Room

"Once, right after my ex had lost his friend in an airplane accident, we took [the Ouija board] out to use it. She was very present. She was very scared and alone and desperate for communication. We stopped using it and immediately I felt this presence in the corner of the room. I closed my eyes to take a deep breath. Suddenly the pointer started moving rapidly around and going too fast to spell out the words. It was terrifying. I refused to use the Ouija board again.

"I immediately felt exhausted. Completely and utterly drained. I lay down and had a nap. I was asleep for exactly 30 minutes. I woke up, bolted out of bed. I closed my eyes for a second to adjust myself to where I was, and I 'saw' this spirit/skeletal thing standing in the corner of the room. It suddenly rushed at my face and started screaming at me, with a big, gaunt mouth. I opened my eyes and started screaming at my boyfriend to get it off me. I could feel it, so oppressive and aggressive, trying to get on/in me. I ran from the house, screaming [and] shaking.

"I don't think I ever used the Ouija board again. One day, it disappeared from my bedroom. It completely vanished. I have never found it. I have no explanations for what happened to it." —Reddit user gothpsy29

7. The Figure at the Window

"When I was around 12–14, one girl brought an Ouija board to my friend's birthday/slumber party. I was pretty skeptical, but also really curious about it, as I had never used one before. We took turns asking questions, and I just figured someone else was moving the planchette. The other girls were pretty creeped out, but I wasn't until it answered a question for me that nobody else knows the answer to. To this day, I can't explain how that answered appeared, or any of the other paranormal experiences that happened after we put that board away. I truly believe that we contacted something, and it stuck around.

"There were just generally a lot of small things, like footsteps above us when we were on the top floor. The door kept swinging open on its own, and the girl who lived there said it never did that on its own before then. The creepiest part was that a bunch of us randomly woke up around 4 or 5 in the morning and a few girls saw a black figure walking down on the street outside the window. Apparently one of the girls had seen what they thought was the same figure with his face at the window (on the second story) earlier in the night." —Reddit user aaraabellaa

8. Secrets of the Lake

"When I was little, my mom took out a Ouija board and asked my brother and I if we'd like to play with it ... It started out pretty funny. Someone was obviously moving the glass thing, making words like 'poop' and stuff like that. (Did I mention we were young enough for that to be hilarious?) But then my mom said let's get serious and try to contact someone. Here is where it gets weird.

"A friend of hers had recently gone missing. He'd been missing for a month or so, and nobody knew where he was. When we asked who it was we're talking to, his name was spelled out. Let's just say it was George, since I genuinely don't remember. When we asked George if he was my mom's friend, he said yes. My mom got visibly upset, and asked where he was. 'In a lake' was spelled out. It was extremely upsetting, and we stopped immediately. Mom tried to be lighthearted about it, and since I was young, I believed it was no big deal as well, following her lead.

"About two weeks later, they found George's body. He'd been hit by some car or train or something on some bridge, and his body fell into the nearby lake, though it was more like a very large pond. It was a reasonably remote place, so nobody had found it for a while." —Reddit user TheTreeMan