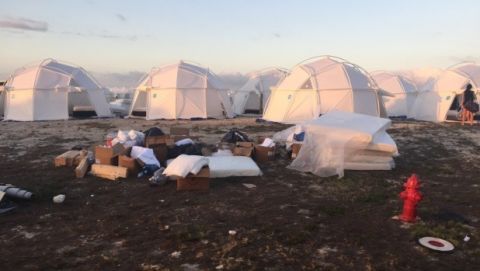 The founders of the Fyre Festival — that super fun vacay in the sand that all the attendees loved a lot! — has issued a weird, long apology-ish on their website.

"Yesterday was a very challenging day for all of us. But we would like to fully explain what happened," they began.

It went on to say that Billy McFarland and Ja Rule started their partnership over a mutual interest in "technology, the ocean, and rap music." (Direct quote.) They thought they could start a new kind of music festival on an island. And so they did just that — kind-of.

They simply weren't ready for what happened next, or how big this thing would get. They started by making a website and launching a viral campaign. Ja helped book talent, and they had hundreds of local Bahamians join in the effort. Suddenly, they found themselves transforming a small island and trying to build a festival. Thousands of people wanted to come. They were excited, but then the roadblocks started popping up.As amazing as the islands are, the infrastructure for a festival of this magnitude needed to be built from the ground up. So, we decided to literally attempt to build a city. We set up water and waste management, brought an ambulance from New York, and chartered 737 planes to shuttle our guests via 12 flights a day from Miami. We thought we were ready, but then everyone arrived.

They went on to say that they were concerned for their guests, but that they were "simply overwhelmed." As if they didn't know how many people were coming to the festival they were selling tickets to.

They also said that the music community was rallying around them to support them. They added that people were rooting for them — I guess that's what all the tweets were about.

They added that all festival goers would be refunded in full, and will get VIP tickets to next year's event. I'm sure they can't wait!

One of the people who was paid to promoted the fest, Bella Hadid, also issued an apology on her Instagram: