Even though Big Little Lies ended with a conclusion as perfect as a Monterey sunset, we still have a big Reese Witherspoon-shaped hole in our lives that needs filling now that it's over.

But hoorah, as it looks as though rumors that a second series could be in the works have just been confirmed by Reese in her not-so cryptic Instagram post featuring herself with costars Nicole Kidman and Laura Dern.

Reese added the caption: "Spending #SundayFunday with these ladies...working on some new lies."

If that's not the official confirmation we've been looking for, then we don't know what is. We're also loving Nicole's casual thumbs-up in the pic...

The hit seven-part HBO series was adapted from Liane Moriarty's novel of the same title (which was set Down Under), and Liana recently revealed that the producers of the miniseries have approached her for ideas for a potential second series.

"I have started to think about ways this could continue," she told the Sydney Herald Times. "I wouldn't write a new book, but perhaps a new story, and then we'll see what happens."

Reese was also a producer on the murder mystery thriller and dark comedy—which co-starred Alexander Skarsgard, Shailene Woodley, and Zoe Kravitz—and said it was partly because she was so fed up of being the only woman in an industry dominated by men.

On starring opposite Nicole, Shailene and Laura, she added: "It became this really interesting group of women whose work I'd always loved."

"Getting to work with them every day was a pleasure," she said. "I learned so much from each of them." 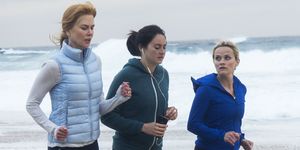 How to Cure Your \'Big Little Lies\' Hangover