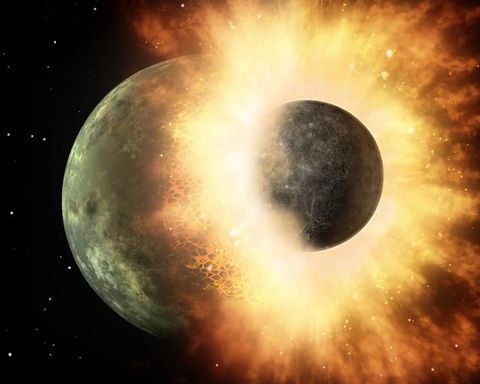 Fun fact: the world is absolutely, undoubtedly, eventually f*cked. Fun fact 2.0: A popular internet theory right now is that the world will actually begin to end tomorrow, September 23, 2017. Final fun fact: It's likely not going to happen (blame National Geographic if it does, they're the ones who told me it wouldn't), but just for fun, let's debunk this whole "we're all gonna die this weekend" thing together.

The theory was first popularized by self-published author and notorious man who cried Doomsday David Meade, the Washington Post reports. Not only does he believe (per his "data and sources" in Biblical numerology which are "the most high-value information on the Internet," he explains on his site) September 23 will bring a constellation signaling a seven-year tribulation period filled with natural, catastrophic disasters, but he also explains tomorrow the Earth will encounter rogue planet Nibiru, which will also be the catalyst for death and destruction of biblical proportions.

This isn't the first time Meade claimed Nibiru was coming to kill us all. Back in 2003, he said a mass collision would end us. When that didn't happen, other conspiracy theorists bumped the world's end back to 2012.

Further fueling Meade's theory is the significance of the number 33, Chron.com reports. Not only will the solar eclipse have been 33 days from September 23, but also, Meade told the Washington Post "Jesus lived for 33 years. The name Elohim, which is the name of God to the Jews, was mentioned 33 times [in the Bible]. It's a very biblically significant, numerologically significant number. I'm talking astronomy. I'm talking the Bible...and merging the two."

Though Meade is claiming no more than the beginning of the end on the 23rd, many are reporting Nibiru is actually set to collide with Earth, effectively fucking us all up immediately. Meade's theories became so widespread a few years ago, NASA actually debunked them, writing in 2012 Nibiru "obviously doesn't exist." NASA posted an editor's update to the same page on September 20: "The planet in question, Niburu [sic/sick burn, NASA], doesn't exist, so there will be no collision."

So there you have it. I'm exhausted. I don't have it in me to make a "but 2017 is the world's end hahahAH" joke, so make one yourself.

Tess Koman Senior Editor Tess Koman covers breaking (food) news, opinion pieces, and features on larger happenings in the food world.
This content is created and maintained by a third party, and imported onto this page to help users provide their email addresses. You may be able to find more information about this and similar content at piano.io
Advertisement - Continue Reading Below
More From Culture
Halloween Costumes You Can Wear for Work Zooms
'Empire Records' Helped Me Understand My Queerness
Advertisement - Continue Reading Below
Iconic '90s Movies to Binge-Watch Right Now
HBO Is Giving Fans a Special 'Euphoria' Episode
Horror Movies Even Scaredy Cats Can Watch
Who's Who In 'The Haunting of Bly Manor'
Avengers Fans, Assemble: 'WandaVision' Is Coming
There Was a 'Friends' Reunion at the Emmy's
When Is 'Schitt's Creek' Coming to Netflix?
The 2020 Emmys Had a Confusing Vibe