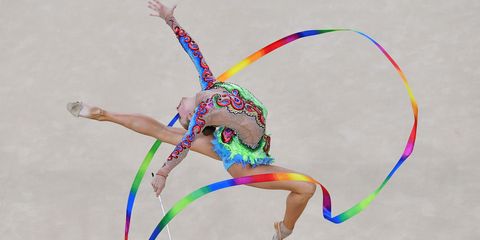 Compared to its more mainstream sibling, rhythmic gymnastics is often overlooked at events like the Olympics. And that's bullshit! It might be limited to the floor event, but the moves on display are still hella impressive, and there are PROPS involved — balls and batons and hoops and ribbons, all of them fabulous. Also, the leotards are much fancier and that has to count for something. (IMO, it counts for a lot.)

Enjoy a series of photos from the all around Olympic rhythmic gymnastics qualifying rounds in Rio Friday, and know that your best hula hoop moves will forever pale in comparison. Also, cheer on Team USA's Laura Zeng, because she's a superstar!

6 Back with the balls again.
Thomas Coex / AFP / Getty Images

9 How do they do it?!
Laurence Griffiths / Getty Images

13 This is some ANTM-worthy posing.
Thomas Coex / AFP / Getty Images

14 Ribbon waving like this is an art form.
Ben Stansall / AFP / Getty Images

19 How are you not stuck forever when you get in a position like this?!
Ben Stansall / AFP / Getty Images

20 How do you even get into a position like this, let alone get stuck there?!
Laurence Griffiths / Getty Images

25 This is like calligraphy, but, like, in the air. I'm so profound, y'all.
Ben Stansall / AFP / Getty Images

27 Seriously why would anyone accessorize with anything other than a rainbow ribbon, for any occasion, ever again?!
Thomas Coex / AFP / Getty Images

34 I just keep coming back to the ribbons (I can't help myself).
Antonin Thuillier / AFP / Getty Images

36 See this might even be a mistake and it's still just ***flawless. Long live rhythmic gymnastics.
Thomas Coex / AFP / Getty Images