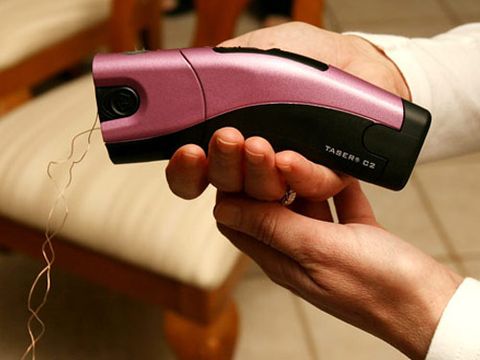 Last summer, when Taser started offering a stun gun in bubblegum pink, we were skeptical. When we heard the company's stock was going up and that women were hosting Tupperware-esque "Taser parties" in homes around the country, we grew concerned. And when we caught wind of one saleswoman's pitch suggesting that the weapons are "all about girl power" because they fit in a purse, we'd heard enough. "There's a lot of evidence that stun guns could be used against the owner," says Amy Barasch of New York's Office for the Prevention of Domestic Violence. Tasers, which temporarily paralyze the victim with a 50,000-volt electroshock, are serious business, banned in seven states; where they're legal, buyers must submit to the same background check they would for any other gun. So unless you'd be comfortable stashing a Glock in your Goyard, we suggest you step away from the Taser.

This content is created and maintained by a third party, and imported onto this page to help users provide their email addresses. You may be able to find more information about this and similar content at piano.io
Advertisement - Continue Reading Below
More From Culture
It's Time To Binge Hulu's Best Documentaries
When Will 'The Crown' Season 5 Be on Netflix?
Advertisement - Continue Reading Below
'The Undoing' Season 2: Everything We Know
Cute Gift Ideas for Every Woman in Your Life
'The Undoing' Differs Sharply From the Book
'The Undoing' Is Packed With Stars
Differences Between 'The Undoing' Book and Novel
It's Been a Weird Year for 'The Bachelorette'
Did Princess Diana Really Dance to 'Uptown Girl'?
'Bachelorette' Frontrunner Brendan Is an Actor