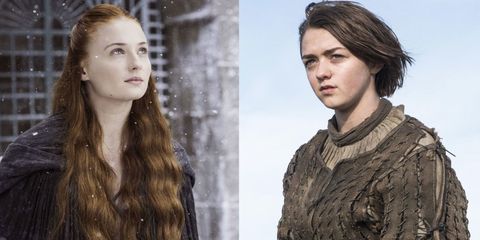 Game of Thrones's new blink-and-you'll-miss-it teaser for season 5 has our anticipation at an all-time high. Though only 10 seconds, the leaked clip (well, kind of—fans have to jump through hoops to watch the teaser on mobile, but a clever Redditor figured out a workaround, as Redditors are wont to do) is filled with ominous shots and brief glimpses of Arya, Sansa, Cersei, and Tyrion.

Why is Arya in a rowboat with Braavosi? Who is holding Cersei against her will? Naturally we're overanalyzing every moment.

The clip is part of GoT's social media campaign for its new site ThreeEyedRaven.com. You can get other sneak peaks of the upcoming season by signing up on the site.

Games of Thrones returns in spring 2015. Let the countdown begin...

Related Stories:
What the Game of Thrones Cast Looks Like in Real Life

The 7 Moments That Got Us Hooked On Game of Thrones

The Emotional Stages of Watching Game of Thrones

Lauren Valenti Associate Web Editor I’m the associate web editor at Marie Claire.
Advertisement - Continue Reading Below
More From Culture
Sydney From the 'Bachelor' Knows Hannah Brown
The 10 Hottest Movies on Hulu Right Now
Advertisement - Continue Reading Below
'The Bachelor' Has Already Finished His Season
When Michelle Carter Is Expected to Walk Free
How Much Time Did Michelle Carter Get in Prison?
'Bachelor' Peter Made a Hilarious Video As a Kid
31 Movies That Are Only About Sex
Who Is 'Bachelor' Contestant Mykenna Dorn?
The Best Love Songs of 2020 (So Far)
A New Show About the Royals Is Coming to HBO Max