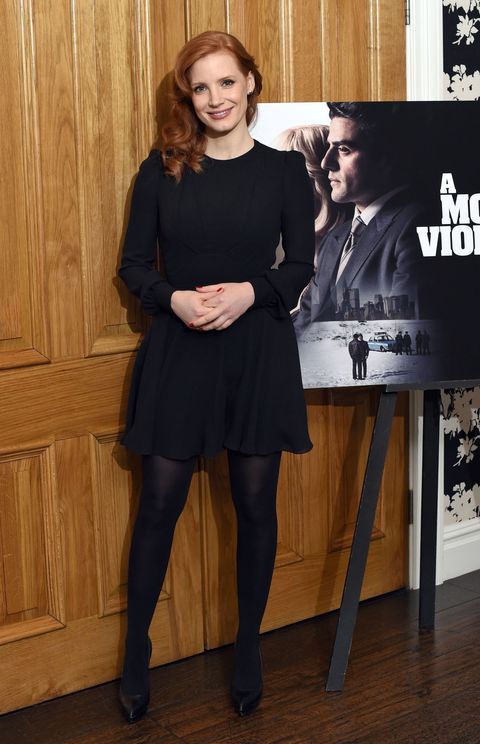 The Oscar nominations, announced last week, told a slightly different story. Although Julianne Moore and Patricia Arquette both scored well-deserved nominations for their work in Still Alice and Boyhood, the Best Picture nominees are heavily male-centric. In fact, of eight nominated movies, only a few feature interesting, fully fleshed-out female lead characters. Which means that Hollywood can and should do better.

At the Critics' Choice Movie Awards late last week, several actresses were honored for their work, including Moore, Arquette, Chastain, Jenny Slate, and Emily Blunt. Blunt won for her kiss-ass role in The Edge of Tomorrow, and in her acceptance speech she noted, "It was the greatest thing ever to not be the damsel in distress in an action movie." Chastain also highlighted the importance of varied characters onscreen when she accepted the Critics' Choice MVP Award: "Today is Martin Luther King Jr.'s birthday, so it got me thinking about our need to build the strength of diversity in our industry," Chastain said. "And to stand together against homophobic, sexist, misogynist, anti-Semitic,and racist agendas. And I can't help but feel hopeful about the future of film, especially looking at all these beautiful people in this room. Martin Luther King Jr. said, 'Our lives begin to end the day we become silent about things that matter.' And I would like to encourage everyone in this room to please speak up."

Backstage, we asked Chastain to elaborate. The best move, she said, is to look to directors like Ridley Scott and Christopher Nolan, who create characters without a specific gender in mind. "I think it's an interesting idea because there are so many films written for and about men," she said. "There's hundreds and hundreds of scripts yet to be produced that are just sitting there. Maybe we should go back and look at those scripts and say 'Which of these characters can we actually change to a female?' That is what I'm actually starting to do. I'm like, 'Send me everything where the female character's most important aspect isn't her sex or that she be a sexual trophy."

Arquette mentioned the specific difficulty of finding good roles for actresses over the age of 40. "I think that this conversation has probably been going on for 30 years and that's unfortunate to tell you the truth," the Boyhood actress said backstage. "I do think it's more difficult to get roles when

We need to prove to the movie studios that we want to see strong, interesting female leads.

you start to get older. And I do have to say, this role happened at this age in my life and I really never imagined it to happen. I'm excited about where film is going. I'm excited about more women getting behind the camera producing roles and writing roles."

For Gillian Flynn, writer of Gone Girl, getting women in roles behind the scenes is key to changing the landscape of Hollywood. "It couldn't hurt to have more women writing the stories," she told Elle.com. "Looking at the Oscar nominations this morning, it was a sparse wasteland, except in the Best Actress category where they had to be women. I think we can do a lot better. We don't need to start congratulating ourselves yet."

Director Ron Howard said it's also about who goes to the movies and which films do well at the box office. As in, we need to prove to the movie studios that we want to see movies that feature strong, interesting female leads. "I think that television has done such a spectacular job of elevating people's awareness to what women can do on screen," Howard said. "Studio executives, financiers –they always follow the audience. The audience is beginning to show up for movies with women in the lead. The creative community is delighted because there are so many rich possibilities there and so many talented women to fill those roles."

The Hollywood issue is not only a gender thing, but an overall creative issue as well. "There's room for better roles for all of us," Selma actress Carmen Ejogo said. "There are really interesting movies being made and then there are some ridiculous movies being made. They're often the ones that keep the Hollywood machine chugging along. Those roles aren't that interesting to me as an artist. We need to find better roles, generally, and more diverse stories to tell. That's the key to bringing better characters to the screen."