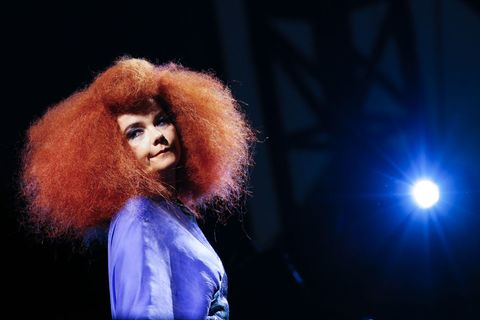 Björk has pulled a fast one—or "a Beyoncé," if you're of that persuasion—and released her first new album in four years, overnight, online. (The move might have been in response to leaks, Stereogum reports.)

Titled Vulnicura, the nine-track collection is available for immediate purchase on iTunes, unless you live in a place that doesn't use pounds as currency. In that case, you'll have to wait 24 hours to hear songs such as "Stonemilker" and "Atom Dance" from the Icelandic artist's anthropological study of "complete heartbreak."

The Leaked Email Heard 'Round the World: Movie Producer Says Angelina Jolie Has No Talent

Chelsea Peng I'm Chelsea Peng, the assistant editor at MarieClaire.com.
Advertisement - Continue Reading Below
More From Culture
The 10 Hottest Movies on Hulu Right Now
'The Bachelor' Has Already Finished His Season
Advertisement - Continue Reading Below
When Michelle Carter Is Expected to Walk Free
How Much Time Did Michelle Carter Get in Prison?
'Bachelor' Peter Made a Hilarious Video As a Kid
31 Movies That Are Only About Sex
Who Is 'Bachelor' Contestant Mykenna Dorn?
The Best Love Songs of 2020 (So Far)
A New Show About the Royals Is Coming to HBO Max
The Ultimate Valentine's Day Playlist