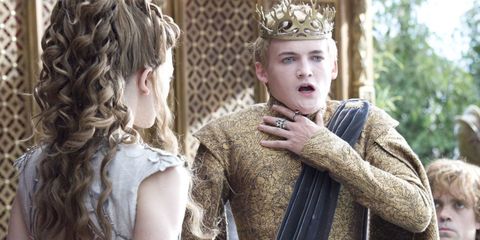 Maybe George R.R. Martin's fantasy books aren't that far off from real life after all?

To whet our appetites in anticipation of Thrones' fifth season, premiering April 12, HBO has released a montage of bloopers and outtakes from last year's episodes. Tyrion, Arya, Cersei, Jaime, Daenerys, the deceased Joffrey and Oberyn, and the rest of the gang all appear, tripping over stone steps and swearing almost as much as their bloodthirsty counterparts. If only Westeros's royalty could learn to laugh like this, maybe they'd all get along.

Here's the Original Plot for Game of Thrones, as Told By George R.R. Martin

This content is created and maintained by a third party, and imported onto this page to help users provide their email addresses. You may be able to find more information about this and similar content at piano.io
Advertisement - Continue Reading Below
More From Culture
'Bridgerton' Season 2: Everything We Know
Who Is HoYeon Jung From 'Squid Game'?
Advertisement - Continue Reading Below
'Succession' Is Ready to Go 'Full F*cking Beast'
The Best Rom-Coms of 2021 (So Far)
'Squid Game' Season 2: Everything We Know
How to Join Marie Claire's Virtual Book Club
Read an Excerpt From Lisa Jewell's Latest Mystery
Talk Race & Friendship With 'We Are Not Like Them'
'The Great British Baking Show' Is Back!
Let's Get to Know 'Sex Education' Newbie Dua Saleh