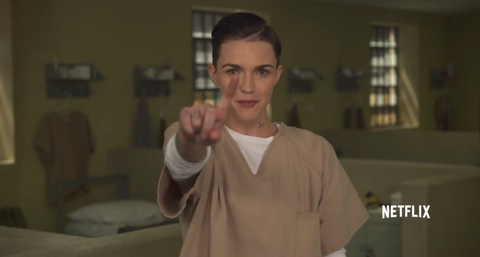 Most people get taken out to lunch or on a boring office tour when they start a new job, but not Ruby Rose, the newest inmate at Litchfield.

To tease season three of Orange Is the New Black—which, ugh, won't air until FOREVER—Suzanne, Taystee, Pennsatucky, Sophia, Red, and the gang covered Tre Coast's "Don't Talk to Me" and simultaneously introduced Rose's character Stella Carlin. (There she is for like a quarter of a second at 0:10!) Not much has been revealed about her character, except...that she has a sarcastic sense of humor and she'll become "a lust object of both Piper and Alex." NBD.

Watch the video below, put it on repeat until June, and start working on getting Poussey a record deal.

'Orange Is the New Black' Gets a Return Date, So You Can Get a Head Start on Re-Watching

The Emotional Stages of Watching Orange is the New Black


This content is created and maintained by a third party, and imported onto this page to help users provide their email addresses. You may be able to find more information about this and similar content at piano.io
Advertisement - Continue Reading Below
More From Culture
'Behind Her Eyes': Is Astral Projection Real?
The Book-to-Movie Adaptations to Catch This Year
Advertisement - Continue Reading Below
The Best Easter Egg in 'Behind Her Eyes'
Breaking Down the Ending of 'Ginny & Georgia'
68 Movies That Are Just Fully About Sex
Could 'WandaVision' Get a Second Season?
Is Wellsbury From 'Ginny & Georgia' a Real Place?
People Have a Lot of Feelings About 'I Care a Lot'
The World According to Billie
Will There Be a Season 2 of 'The Queen's Gambit'?