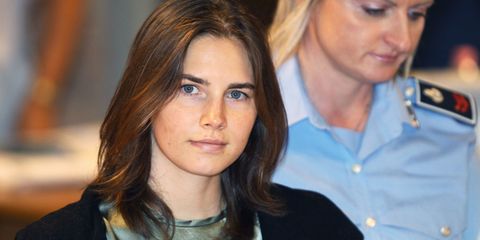 The culmination of an eight-year-long courtroom saga, Amanda Knox and her Italian ex-boyfriend have both, as of late Friday, been acquitted of all charges by Italy's highest court.

The two were accused of murdering Knox's former roommate, 21-year-old student Meredith Kercher, in 2007. Today marks the second time they've had their convictions overturned, but this is the final ruling in a very lengthy and highly publicized case that began when Knox was 20 years old and now, as she approaches her 28th birthday, is conclusively coming to a close.

Knox thanked her supporters in a short statement after the verdict was announced. "I am tremendously relieved and grateful for the decision of the Supreme Court of Italy," she said. "The knowledge of my innocence has given me strength in the darkest times of this ordeal."

The reasoning behind the court's decision will be made public in 90 days. Also, in a bizarre twist of timing, the Amanda Knox movie starring Cara Delevingne premiered in the U.K. today, and will hit American theaters in June. Wonder if they'll have time to update the ending...

The Woman Who Saved Amanda Knox

Lauren Valenti Associate Web Editor I’m the associate web editor at Marie Claire.
This content is created and maintained by a third party, and imported onto this page to help users provide their email addresses. You may be able to find more information about this and similar content at piano.io
Advertisement - Continue Reading Below
More From Culture
New Drama Movies That Promise to Move You
The Sexiest New Movies of the Year
Advertisement - Continue Reading Below
A Look Back at Princess Anne's Life in Photos
Where Is the Cast of 'Gilmore Girls' Now?
'The Bachelor' Is Back!
Who Is "Queen" Victoria on 'The Bachelor'?
Matt James' 'Bachelor' Cast: Everything We Know
Get to Know Serena Pitt From 'The Bachelor'
The Best Lesbian Movies Streaming on Netflix
Listen to the Best New Love Songs of 2021 (So Far)