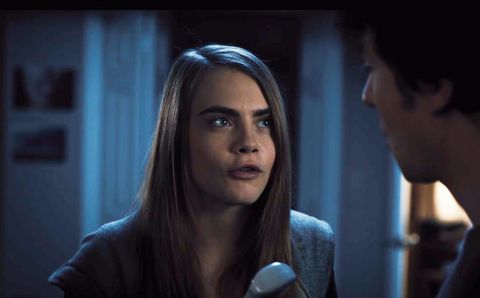 Update: The first clip of Paper Towns is here, and Cara Delevingne is quite the rebel in it. Watch her as Margot convince her neighbor Quentin (Nat Wolff) to help her get revenge on classmate Chuck Parson. This deed involves breaking into his home and removing his eyebrow while he's sleeping, naturally. Watch Quentin's reaction to it below:

For quite some time, Cara Delevingne's been teasing her starring role in the film adaptation of John Green's Paper Towns with Instagram videos and images. But the wait to see and hear Delevingne as Margot, the film's mysterious American dream girl, is over. The first trailer debuted today, and the British model (along with her practiced, Taylor Swift-approved American accent) is all over it.

Watch Delevingne take her neighbor Quentin (Nat Wolff) on a surprise all-night adventure before disappearing the next day. The boy's in love with her and goes out to find her with his friends. There are inspired speeches, ex-boyfriend "revenge plots," school dances, and carefree car rides in the two-minute clip. It's really everything a teen romance should be.

50 MTV Movie Awards Outfits That Failed So Hard They Won

All the Amazing Looks from the MTV Movie Awards

Alyssa Bailey News and Strategy Editor Alyssa Bailey is the news and strategy editor at ELLE.com, where she oversees coverage of celebrities and royals (particularly Meghan Markle and Kate Middleton).
Advertisement - Continue Reading Below
More From Culture
Candice Marie Woods on Playing Diana Ross
45 Iconic '90s Movies to Binge-Watch Right Now
Advertisement - Continue Reading Below
You Can Get a ‘Golden Girls’ Birthday Party Kit
Meet the Star of 'The Bachelor's ChampagneGate
Hannah Ann Sluss From 'Bachelor' Was a Model
Who Is 'Bachelor' Peter's Mom Talking About?
Who Is Hannah Ann Sluss From 'The Bachelor'?
Who Is 'Bachelor' Contestant Victoria Fuller?
Who Is 'Bachelor' Contestant Madison Prewett?
Who Are the Women of 'The Bachelor' in 2020?