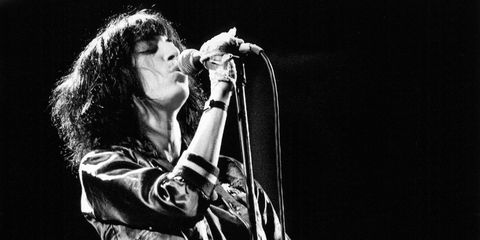 Answering all of the prayers we've recited since the moment we read (then reread 10x over) the last line of Just Kids, Patti Smith is writing another memoir.

According to Entertainment Weekly, the book is titled M Train. Smith says the book is a "roadmap" to her life and will have 18 different "stations," which will include black-and-white Polaroids. The stops/stations, many of which are her favorite coffee shops and cafes, include Frida Kahlo's Casa Azul in Mexico, an Arctic Explorer's Society meeting in Berlin, and Cafe 'Ino in Greenwich Village, where the story begins. She's pictured at the the haunt on the last day before it closed–a passing photographer took the picture–and describes it as: "the first and last picture at my corner table in Ino... My portal to where." In this instance, we're hailing it totally okay to judge a book by its cover.

M Train will be published on October 6.

Lauren Valenti Associate Web Editor I’m the associate web editor at Marie Claire.
Advertisement - Continue Reading Below
More From Culture
The Best New Music of 2020 (So Far)
Listen Up: Gripping New True Crime Podcasts
Advertisement - Continue Reading Below
'The Bachelor' Has Already Finished His Season
Unmissable Horror Movies Coming Out This Year
Who Is 'Bachelor' Peter's Mom Talking About?
Sarah Coffin Might Be a 'Bachelor' Frontrunner
Who Is 'Bachelor' Contestant Victoria Fuller?
Meet the Star of 'The Bachelor's ChampagneGate
Jurnee Smollett-Bell Is a Real Life Superhero
The Best Love Songs to Ever Exist