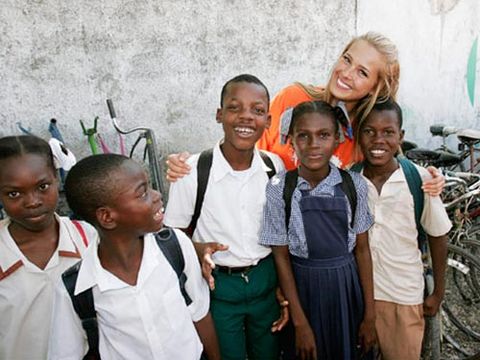 Before I visited Haiti, I'd heard a lot of bad things about it. "Oh, there's no hope for Haiti," people said. "Forget about it." They couldn't have been more wrong. True, the country is the poorest nation in the Western Hemisphere, and people often have to eat mud cakes - yes, actual cakes made of mud - to fill their stomachs. And I'd heard about the sprawling slum called Cite Soleil, where for years people lived in fear of getting machine-gunned down by gangs. But the country has come a long way, thanks in part to a U.N. peacekeeping force, and the Haiti I saw was a beautiful place filled with hope. I traveled to the capital city, Port-au-Prince, with Haiti's native son, singer Wyclef Jean, and we worked together to bring computers to a school near his hometown. For the past few years, I've been helping to build computer labs around the world through my organization, the Happy Hearts Fund, which I started up after the tsunami in 2004. Here's how my latest trip went.

These kids knew about computers, but had never actually used one. They thought it was funny when Wyclef (sitting next to me) showed them a mouse. "A mouse?" one boy asked. He hadn't heard of that. But soon he'll outgrow the teacher.

This is the heart of Cite Soleil, which is near the school where we installed the computers. Everyone here knew Wyclef - he's their idol. When a group of kids spotted him, we stopped our car and got out; then they picked him up and carried him over their heads. It was so beautiful. He is their hope and the light for the whole of Haiti.

The kids in Cite Soleil asked, "Are you Shakira?" Actually, a lot of people asked me that, which I thought was funny. I'm the worst singer on the planet, but people kept asking me to sing anyway. Children in this slum are incredibly poor - the young ones often run around naked. Malnutrition is widespread in Haiti; every hour, a child under the age of 5 dies. We gave a T-shirt to a little boy who had no clothes, and then all the kids wanted T-shirts. They were crazy for T-shirts. Just a small thing like that completely made their day.

We had traditional dishes of meat, tomatoes, and bananas at this community kitchen, launched by Wyclef and his foundation, Yele Haiti (which means "Haiti's cry for freedom"). There are many ways to help people here - and around the world, for that matter. And it brings you such joy to do so. In fact, it's very selfish to help others, because while you make them happy, you feel even better yourself. This should be the new selfish - helping others!

Abigail Pesta Abigail Pesta is an award-winning journalist who has lived and worked around the world, from London to Hong Kong.
This content is created and maintained by a third party, and imported onto this page to help users provide their email addresses. You may be able to find more information about this and similar content at piano.io
Advertisement - Continue Reading Below
More From Culture
The Best Lesbian Movies Streaming on Netflix
Listen to the Best New Love Songs of 2021 (So Far)
Advertisement - Continue Reading Below
Who Is Christine Chiu on Netflix's 'Bling Empire'?
Could 'WandaVision' Get a Second Season?
Avengers Fans, Assemble: 'WandaVision' Is Here
Where Is Night Stalker Detective Gil Carrillo Now?
What We Know About Part 2 of 'Lupin'
A Look Back at Princess Anne's Life in Photos
Where Is the Cast of 'Gilmore Girls' Now?
The Most Hotly Anticipated TV Shows of 2021