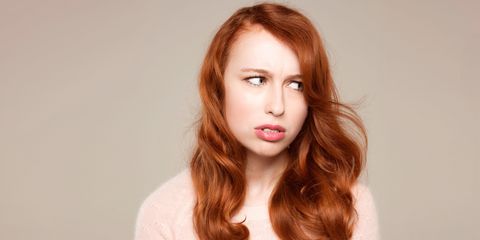 A right-wing shock jock named Doc Thompson apparently doesn't know what feminism is, sohe crowd-sourced answers on Twitter over the weekend. And there were so many responses that the hashtag #HowtoSpotaFeminist started trending. You can see some particularly *choice* examples below.

Let us make this easy for you, Feminism Misinterpreters: The feminist is the one laughing at all these gross, outdated, sophomoric generalizations. And in case you need to figure out how to "spot" her, she looks like your girlfriend, your mom, or your sister, or he could resemble any one of your buddies. The only requirement to join is a belief that men and women are equal, so hey, Doc and company: We're not an endangered species whose camouflage you need to peek under. We're right here, plain as day, staring you back in the face.

#HowToSpotAFeminist has a degree in women's studies and is pissed at the world because she/he can't find a job outside of fast food.

#HowtoSpotAFeminist Struggling at the side of the road to change a tire, in the pouring rain, refusing all 'male' help. Oh, & her beard.

Want to be treated the same as men, but cry when they are treated like men. #HowToSpotAFeminist #WhatILearnedToday

Oh, but then the real feminists responded in force, and it was awesome:

She's too busy running her life to notice your insults #HowToSpotAFeminist

#HowToSpotAFeminist *raises hand, waves at everyone*

#HowToSpotAFeminist? Easy: follow the trail of broken glass to where they smashed through the ceiling!

Emma Watson on Feminism: "All We're Here to Do Is Give You A Choice"

Chelsea Peng I'm Chelsea Peng, the assistant editor at MarieClaire.com.
Advertisement - Continue Reading Below
More From Culture
Family Movies Both Grown-Ups and Kids Will Love
The Best Wedding Movies of All Time
Advertisement - Continue Reading Below
Read 'Anna K' Even If You Didn't Read the Original
19 Most Underrated Films of All Time
The Music Podcasts We Keep Pressing Play On
Why You Keep Seeing "Until Tomorrow" on Instagram
The 19 Best Murder Mystery Movies
How to Join Marie Claire's Online Book Club
'In Five Years' Is MC's April Book Club Pick
'Little Fires Everywhere' Is a '90s Time Capsule