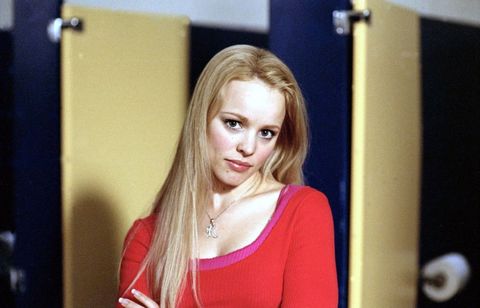 That is not really what happens in this newly resurfaced deleted scene from Mean Girls, but—and this part is completely true—that's only because the pain meds suppressed her killer instincts and the spinal halo made it impossible to execute the hacking movements. So Regina's only option is to throw Cady off by telling a childhood story about shoving a dollhouse down the stairs just so her cousin couldn't play with it. And the story, dare we say it, reveals another layer of her character. (She's an onion, guys.)

Did they cut the scene because, ick, too sweet? Because it's really just the Percocet talking for Regina? Or maybe they wanted to keep the blood feud going for the sequel with Jennifer Aniston? Dunno, but Tina Fey knows best. Watch the clip here.