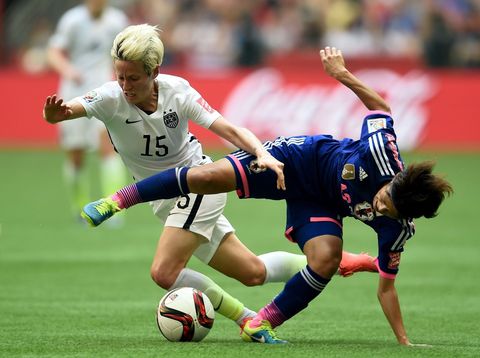 If you were feeling a bit of the post-4th-of-July blues, how's *this* for patriotism—in a massive win, the U.S. team defeated Japan 5-2 today in the Women's World Cup final, and they're coming home champions.

It's the highest-scoring final in Women's World Cup history, and midfielder/superhero Carli Lloyd's a big part of why: She scored three goals in the first 16 minutes. Oh also, the U.S. women's team is the first to ever win three World Cup titles.

Getty Images
Jessica Pels Editor-in-Chief As the editor of Cosmopolitan, I oversee the editorial for all of Cosmo's efforts across print, digital, video, and emerging platforms.
Advertisement - Continue Reading Below
More From Culture
'Good Girls' Is Back for an Explosive Season 3
Netflix's 'Haunting of Hill House' Will Return
Advertisement - Continue Reading Below
Criminal Minds Season 15 Will Be Its Last
The Hot New Podcasts to Add to Your Queue
Who Are the Women of 'The Bachelor' in 2020?
Join Marie Claire's Virtual Monthly Book Club