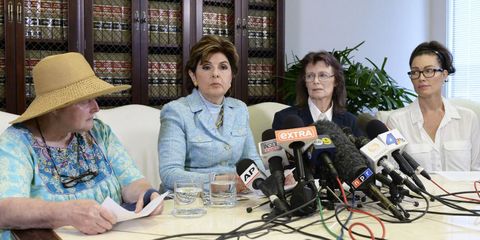 Update, 8/13: Three more victims have come forward to claim that Bill Cosby sexually assaulted them, reports Us Weekly. Attorney Gloria Allred, who will be heading up the case, gave a press conference on Wednesday with Colleen Hughes, Linda Ridgeway Whitedeer, and Eden Tiri , who recounted their attacks—all of which happened in their 20s.

According to Hughes, 64, who was a flight attendant at the time, Cosby allegedly drank champagne from her Gucci footwear during their meeting at his hotel. "He raised the shoe toward me offering the drink in my shoe to me and said, 'A princess should always drink champagne out of a glass slipper.'"

Hughes said she passed on the shoe, but opted for a glass of champagne. She told reporters she passed out and woke up in his hotel room hours later and felt semen on her back. "Bill obviously didn't use a condom," she said.

Whitedeer, 69, was an aspiring actress who approached the actor looking for advice, which led to sexual assault. Tiri, 49, had appeared in episodes of The Cosby Show, and claims she was verbally assaulted by the actor, though nothing physical happened.

Read more on Us Weekly.

Original story, 7/27: The latest issue of New York Magazine has a powerful new cover article and photo series, featuring interviews with 35 women who have all come forward to talk about their allegations against Bill Cosby. All of the women featured in the series have accused the stand-up comedian of rape, often by using alcoholic beverages laced with drugs.

"Bill had been a friend," Kathy McKee told the magazine. "I had had dinner with his wife on one or two different occasions, I had worked with him, I had known him for many, many years, and he never made a pass at me. So when this happened to me, I was really, really shocked. I just couldn't understand what was wrong with him. Had he lost his mind? When I came out of the bathroom, he said to me, 'Okay, come on, let's go. They're waiting for us.' He was behaving like a person that I had never met before in my life."

Barbara Bowman, who met Cosby at the age of 17, penned a heartbreaking op-ed in the Washington Post in 2014, questioning why it took so long for the media to take the allegations seriously. Bowman told New York Magazine Cosby (who was supposed to be her mentor) made her feel like a "prisoner."

"Over the course of the next year, I was drugged half the time when I was with him and would come out of a delusional experience going, 'Whoa, what was that?'" she said. "I could have walked down any street of Manhattan at any time and said, 'I'm being raped and drugged by Bill Cosby,' but who the hell would have believed me? Nobody, nobody."

"It took me a long, long time to come to terms with the fact that it was him, it wasn't me," said Linda Joy Traitz, who told the magazine Cosby assaulted her when she was only 18 years old. "Life has not been easy for me. I had addiction problems as I got older."

Read the rest of their stories and watch the powerful videos on NYMag.com.