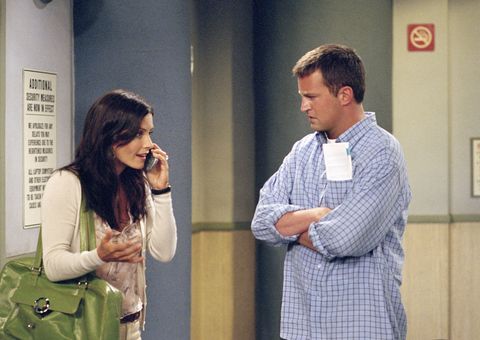 Who can understand the vagaries of the internet? Not I, but do the patterns of waxing and waning interest *really* matter when there's a deleted scene from Friends to be watched? Didn't think so.

Originally uploaded in 2007, the clip below involves Chandler and Monica being taken for terrorists as they leave for their honeymoon. Writers cut the footage because the episode ("The One Where Rachel Tells Ross") was due to air two weeks after 9/11.

Today, Mr. and Mrs. Bing's misadventure is getting loads of unexplained traction on social media, which seems to suggest, as the scrolling introduction notes, that the scene really can "now be viewed in the spirit which they were originally intended."

This content is imported from YouTube. You may be able to find the same content in another format, or you may be able to find more information, at their web site.
This content is created and maintained by a third party, and imported onto this page to help users provide their email addresses. You may be able to find more information about this and similar content at piano.io
Advertisement - Continue Reading Below
More From Culture
Suni Lee Just Scooped Up Gold in Tokyo
Movies Everybody Should Watch At Least Once
Advertisement - Continue Reading Below
'Virgin River' Season 4: Everything We Know
'Love Is Blind' Season 2 Is Coming!
Simone Biles' Sister Is Her Fiercest Champion
Simone Biles Quotes to Live By
Could 'Manifest' Come Back for a Fourth Season?
'Bachelor In Paradise' 2021: Everything We Know
Read an Excerpt From 'We Were Never Here'
How to Join Marie Claire's Virtual Book Club