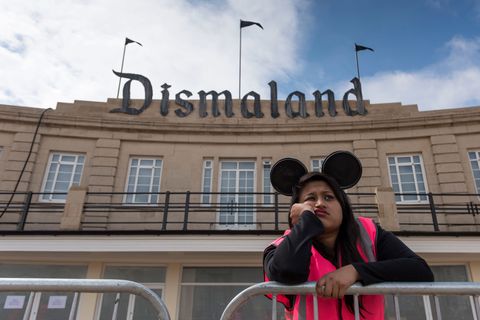 When Dismaland opened last week, the internet briefly put aside its infatuation with Pepe to interpret the Deeper Meanings of the art objects contained in Banksy's twisted, decaying theme park. (Then these slo-mo videos of dogs having their fluff blow-dried happened.)

What does Cinderella's toppled-over carriage mean? (Popular opinion says it's an indictment of the paparazzi's involvement in Princess Diana's death.) Does the flimsy cardboard security checkpoint symbolize the futility of public surveillance? Why is Ariel's reflection in focus BUT NOT HER IRL?

IDK, but you can take a tour of Dismaland through the eyes of some random family who thought that shooting at models of migrant-carrying boats would make a nice family outing.

Chelsea Peng I'm Chelsea Peng, the assistant editor at MarieClaire.com.
Advertisement - Continue Reading Below
More From Culture
Who Is 'Bachelor' Contestant Madison Prewett?
Pre-Order These Amazing Books Coming Out in 2020
Advertisement - Continue Reading Below
Jenna Dewan's BF Reacts to Channing Tatum's Drama
The Best Korean Dramas of All Time
Mainstream Movies With * A LOT * of Nudity
Things Between Victoria F. and Chase Rice Got Ugly
Who Are the Women of 'The Bachelor' in 2020?
Rosalía Is the One to Watch at This Year's Grammys
Sydney From the 'Bachelor' Knows Hannah Brown
The 10 Hottest Movies on Hulu Right Now