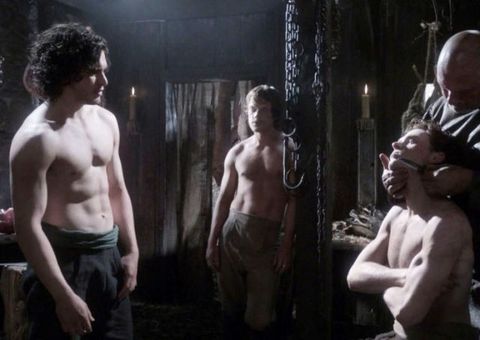 Remember when everyone associated with Game of Thrones was like, "Jon Snow is dead as a doornail?" Remember how, after those photos of Kit Harington lurking around Belfast were posted, they were then like, "Ho hum, pretty convenient Melisandre was there, eh?" Now they've gotten so bold as to maintain that Ned Stark's bastard is dead while proposing a new plotline for his character. SMH.

At a panel during New York Comic Con, Finn Jones/Loras Tyrell crushed Obara's dreams of ever having a scene with ol' Jonny, mostly because he wants him all to himself now that Renly's out of the picture.

"He's dead, you couldn't possibly work with him," Jones said to his cast mate (via the Hollywood Reporter), later adding that if Jon ever met Loras, "he would try to turn Jon Snow gay. I'd like to see that happen. And share hair tips. I could teach him a thing or two."

Um, speak for yourself, dude.