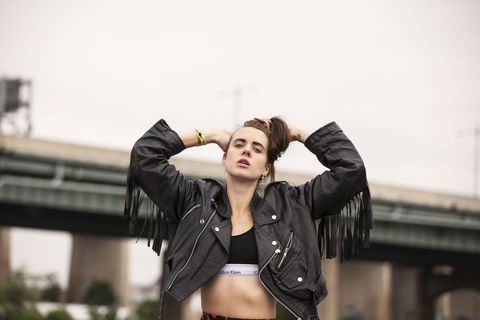 Spotify has revealed its most popular track ever, and TBH, it's a bit of a surprise.

For one, it's not a Michael Jackson classic or, you know, Beyoncé. And then there's the fact that it's not exactly a number-one song, peaking at No. 4 and No. 2 spots in the US and UK respectively. So, what song has quietly racked up 526 *million* plays worldwide?

That would be the infectious, Bollywood-inspired club banger "Lean On," by Major Lazer. The track is made up of producers Diplo and Switch, featuring MØ (you might know her from this ridiculously-good Spice Girls cover) and DJ Snake.

And here's the craziest part: the song landed in Major Lazer's lap after being turned down by Rihanna AND Nicki Minaj, which is like Sarah-Michelle-Gellar-turning-down-the-role-of-Cher-in-Clueless cray.

As for who Diplo and the gang knocked out of the top spot, that would be Ed Sheeran with his pull-at-your-heart-strings ballad "Thinking Out Loud." Better luck next time, Eddy boy!

ALL
WE
NEED
IS
SOMEBODY
TO
LEAN
🔛

Lauren Valenti Associate Web Editor I’m the associate web editor at Marie Claire.
Advertisement - Continue Reading Below
More From Culture
39 Movies That Are Only About Sex
'Good Girls' Is Back for an Explosive Season 3
Advertisement - Continue Reading Below
Netflix's 'Haunting of Hill House' Will Return
Criminal Minds Season 15 Will Be Its Last
The Hot New Podcasts to Add to Your Queue
Who Are the Women of 'The Bachelor' in 2020?
Join Marie Claire's Virtual Monthly Book Club