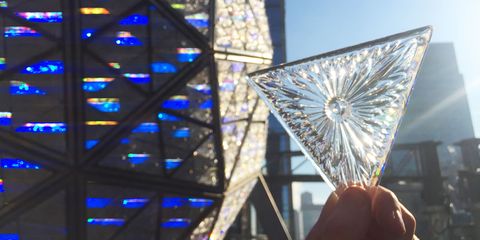 New Year's Eve is a time for resolution making, champagne popping, and of course, one huge crystal ball dropping. With an estimated *million* people expected to cram into Times Square and another *billion* tuning in worldwide, the ball drop is quite the spectacle—so I headed to the top of 1 Times Square (400 feet—in heels!) to get a sneak peek at just what the 2016 Waterford Crystal New Year's Eve crystals will look like. And it didn't disappoint. (Good thing, because did I mention I was wearing heels?)

I joined Tom Brennan, second generation master artisan and spokesperson for Waterford Crystal at the tippy-top of the busiest place in NYC to get the very first glimpse of one of the 288 new crystals being installed on this year's ball. The theme? "The Gift of Wonder."

Brennan and I talk about the ball. It's huge, FWIW.

And the theme definitely works—an 11,875 pound ball covered in 2,688 Waterford crystal triangles and illuminated by 32,256 Phillips LEDs? That's quite a disco ball—and definitely a certifiable wonder. And amazingly enough, we'll be back on December 27th to help install the "Gift of Wonder" crystals. So stay tuned for more. Until then, the countdown is on.

This content is created and maintained by a third party, and imported onto this page to help users provide their email addresses. You may be able to find more information about this and similar content at piano.io
Advertisement - Continue Reading Below
More From Culture
Pre-Order These Highly-Anticipated 2021 Books
The Best Shows to Stream on Every Platform
Advertisement - Continue Reading Below
Where Is the Cast of 'Gilmore Girls' Now?
A Look Back at Princess Anne's Life in Photos
Historical Films to Stream If You Loved 'Hamilton'
The Top-Grossing Book-to-Movie Adaptations
Meena Harris and 'Bridgerton' Collab for Merch
Will There Be a Season Two of 'Ginny & Georgia'?
We Need to Talk About the End of 'Behind Her Eyes'
People Have a Lot of Feelings About 'I Care a Lot'