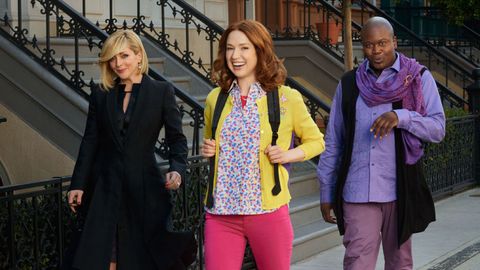 She's a single New York City gal who escaped Jon Hamm's doomsday cult, and now, Kimmy Schmidt is back for more optimism and proverbial potato products on the second season of her eponymous Netflix show.

Entertainment Weekly provided the first look at UKS's return this spring, when Kimmy will take on a series of odd jobs—including working as a Christmas elf—to supplement her nanny income. She'll also put her past behind her to focus on finding one boyfriend, instead of "juggling," as Ellie Kemper put it.

ARE YOU READY FOR THIS?? Hash brown no filter.

Chelsea Peng I'm Chelsea Peng, the assistant editor at MarieClaire.com.
Advertisement - Continue Reading Below
More From Culture
How the 'To All the Boys 2' Soundtrack Was Made
Does 'Bachelor's Madison Prewett Self-Eliminate?
Advertisement - Continue Reading Below
How Much Does 'The Bachelor' Make?
Tales of a Hollywood Con Queen
Who Will Be on 'Bachelor in Paradise' in 2020?
When Will 'The Bachelor' Women Tell All Air?
'The Bachelor' Has Already Finished His Season
The Very Best Rom-Coms of All Time, Ranked
An Investigation Into the Next 'Bachelorette'
The Best Korean Dramas to Get You Hooked