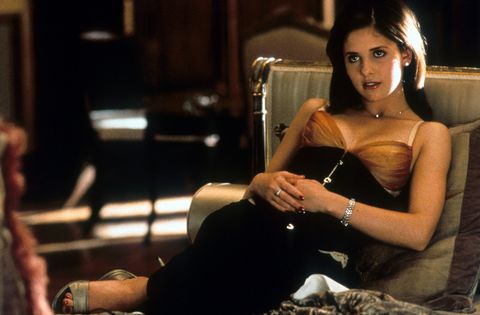 The Cruel Intentions reboot just got a little crueler. Sarah Michelle Gellar has signed on to reprise her role as Kathryn Merteuil in NBC's reboot of the '90s film, the self-described "Marcia f--king Brady of the Upper East Side" who has a penchant for side-eye and drug-laced rosaries.

Also, when we say "trying to destroy" we obviously mean "trying to have sex with." Lest you forget, dating relatives is the opposite of a deal breaker for Kathryn Merteuil.

Mehera Bonner Contributor Mehera Bonner is a news writer who focuses on celebrities and royals—follow her on Instagram.
This content is created and maintained by a third party, and imported onto this page to help users provide their email addresses. You may be able to find more information about this and similar content at piano.io
Advertisement - Continue Reading Below
More From Culture
The Sexiest New Movies of the Year
A Look Back at Princess Anne's Life in Photos
Advertisement - Continue Reading Below
Where Is the Cast of 'Gilmore Girls' Now?
'The Bachelor' Is Back!
Who Is "Queen" Victoria on 'The Bachelor'?
Matt James' 'Bachelor' Cast: Everything We Know
Get to Know Serena Pitt From 'The Bachelor'
The Best Lesbian Movies Streaming on Netflix
Listen to the Best New Love Songs of 2021 (So Far)
Who Is Christine Chiu on Netflix's 'Bling Empire'?