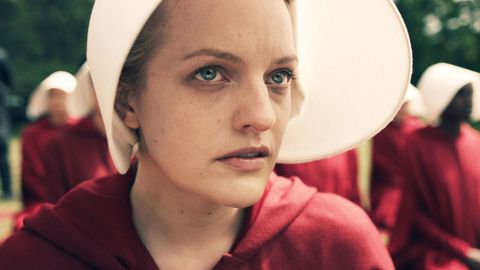 Hulu has released a 30-second Super Bowl teaser for its upcoming drama The Handmaid's Tale, marking the first ever big-game commercial for the streaming platform.

Adapted from Margaret Atwood's 1985 novel, The Handmaid's Tale is set in a dystopian future where women's rights have been abolished, and women of childbearing age are forced into sexual and reproductive slavery in the households of powerful men.

The 30-second trailer highlights Offred (Elisabeth Moss) as she is initially captured by the totalitarian government, separated from her daughter, and forced to become a "Handmaid" for a military commander (Joseph Fiennes) whose own wife (Yvonne Strahovski) cannot conceive.

"Better never means better for everyone. It always means worse, for some," Fiennes' commander tells Offred in the new footage, referring to the dictatorship under which they now live.

As has already been widely teased, The Handmaid's Tale is far more relevant and frightening than anyone could have imagined when it went into production last year, given that the United States now has a government that genuinely would like to repeal women's reproductive rights.

Emma Dibdin Contributor Emma Dibdin writes about television, movies, and podcasts, with coverage including opinion essays, news posts, episodic reviews and in-depth interviews with creatives.
This content is created and maintained by a third party, and imported onto this page to help users provide their email addresses. You may be able to find more information about this and similar content at piano.io
Advertisement - Continue Reading Below
More From Culture
You *Need* to Follow the 'Bling Empire' Cast on IG
Watch the Trailer for the New 'Euphoria' Special
Advertisement - Continue Reading Below
We've Getting a Season 2 of 'Bridgerton'
New Drama Movies That Promise to Move You
The Sexiest New Movies of the Year
A Look Back at Princess Anne's Life in Photos
Where Is the Cast of 'Gilmore Girls' Now?
'The Bachelor' Is Back!
Who Is "Queen" Victoria on 'The Bachelor'?
Matt James' 'Bachelor' Cast: Everything We Know