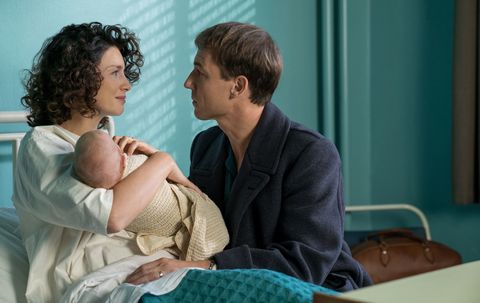 Rejoice: the droughtlander is (almost) over. Starz just released the *official* trailer for Outlander's upcoming third season, and judging from the footage it looks absolutely incredible.

Season three picks up right after Claire travels through the magical stones and returns to her life in 1948 (in other words, we're doing some major time travel). We'll get to see the early days of her pregnancy, as well as her marriage to Frank. Meanwhile, Jamie is chilling in the 18th century after the battle of Culloden—so, how will they eventually reunite? You're going to have to watch obsessively to find out, but we have a feeling that won't be a problem. *winks*

Outlander returns to Starz on Sunday, September 10 at 8 p.m. ET.

Mehera Bonner Contributor Mehera Bonner is a news writer who focuses on celebrities and royals—follow her on Instagram.
Advertisement - Continue Reading Below
More From Culture
Treat Yourself to a Chick Flick Tonight
Who Will Be on 'Bachelor in Paradise' in 2020?
Advertisement - Continue Reading Below
An Investigation Into the Next 'Bachelorette'
'The Bachelor' Has Already Finished His Season
Can We Talk About Kelly's Mom From Love Is Blind?
The Best Reactions to the 'Love Is Blind' Finale
Hilary Duff Hints About 'Lizzie McGuire' Reboot
Ryan Murphy's Producing a Love Letter to Hollywood
This Is When the 'Love Is Blind' Finale Will Drop
Will Gigi and Damian Actually Get Married?