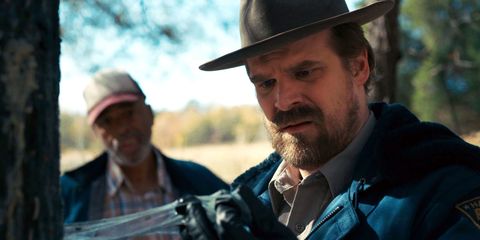 It seems as though one particular Stranger Things theory won't disappear, and it relates to Hopper's daughter. Fans of Season 1 will remember that the Chief of Police Hopper's daughter passed away from cancer when she was very young. As a result, Hopper turned to alcohol to cope, but he never stopped pioneering justice. And now, in an interview with TV Guide, David Harbour, who plays Hopper, seems to have revealed some details that fuel the rumors that his daughter isn't actually dead.

"Hopper's daughter will be the primary focus of Season 2, but not in the way that you think it will be. Hopper's understanding of that relationship and Hopper's understanding of being a father and of being a man grows deeper and deeper in Season 2, and we get a lot of time to explore what that is, but it won't be in the literal way that you think it is. I don't want to tell you any more than that because it's good stuff."

While Harbour's interview is deliberately vague, it certainly suggests that Season 2 will reveal a lot more about Hopper's daughter. And that, perhaps, he'll find out some things about her that he didn't know before.

Bustle even theorizes that Eleven is, in fact, Hopper's daughter. As Bustle reports, "The last time Hopper is seen in Season 1, he leaves Eggos in the woods for Eleven. It's a scene that hints Hopper and Eleven will meet again, and that he may even step into the role of her father."

While the answers remain unclear for now, it's certainly suspicious that this particular theory won't die.

Amy Mackelden Weekend Editor Amy Mackelden is the Weekend Editor at HarpersBAZAAR.com, where she writes about entertainment, celebrity news, beauty, and fashion.
Advertisement - Continue Reading Below
More From Culture
The Best Korean Dramas of All Time
Mainstream Movies With * A LOT * of Nudity
Advertisement - Continue Reading Below
Things Between Victoria F. and Chase Rice Got Ugly
Who Are the Women of 'The Bachelor' in 2020?
Rosalía Is the One to Watch at This Year's Grammys
Sydney From the 'Bachelor' Knows Hannah Brown
The 10 Hottest Movies on Hulu Right Now
'The Bachelor' Has Already Finished His Season
When Michelle Carter Is Expected to Walk Free
How Much Time Did Michelle Carter Get in Prison?