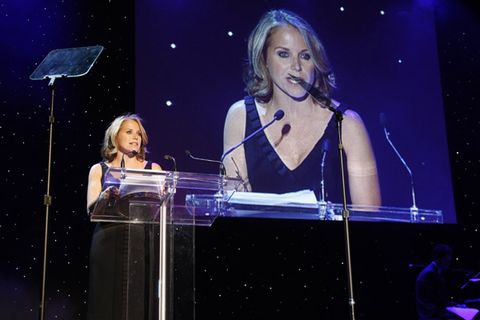 "Everyone's grumbling about her reported $15 million a year. But Katie broke the glass ceiling for all of us. So to the women who've been sniping: Stop it. And to Katie: Thank you."

"I guess I missed this one, because I was so busy reading about how, when male anchors started standing to deliver the news, it was just a fake macho-man thing. Oops — no one criticized them for that. My mistake."

"Let's not kid ourselves. You pick up The Washington Post

and find O.J. Simpson on the front page; 'serious journalists' covered Anna Nicole Smith. If the critics have some spare time, I suggest they start shoring up their glass houses."

The trip to Iraq:

"This is not Katie trying to look serious while standing in front of a prop Humvee. She landed important interviews with Bush and the president of Syria. She used her hard-news background and her gravitas to deliver the story. Shame on anyone who cried 'stunt.'"

"Every time we open a newspaper, we hear about her ratings. Over time, that stuff becomes self-fulfilling. If the momentum had been going the other way, and people were cheering her on as a trailblazer with 28 years of experience, she'd be winning. (Plus, any of us on cable would kill for her numbers...)."

"A lot of people in this business are born with money or family connections. No one handed Katie anything. She was in the trenches at CNN in the '80s, when all they had was a stapler and some Scotch tape, and has been working nonstop since. Look, I'm not a friend of Katie's. I'm a rival, and I want to beat her. But I'm not going to slam her for doing what no other woman has. So, she should ignore the critics and, at the end of every day, remind herself of everything she has achieved. But, then again, Katie Couric doesn't need my advice."