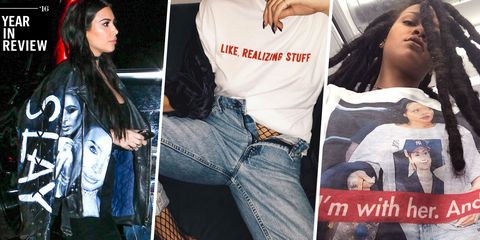 Do you love yourself a meta moment? Cool, so does 2016. In fact, this year was full of self-awareness and fourth wall breakage that we rounded up a list of our favorite meta moments for you to enjoy over a nice yule log. Happy holidays!

Meta vibes = strong. Also, in case anyone is in the market for one of these, it's made by New Zealand artist Clara Chon and her label Blue Blank.

2 Oh, and When She Got a Kimoji Manicure

Because why not decorate your fingers with tiny animations of...your fingers?

3 Literally Everything About 'Deadpool'

Deadpool is basically 108 minutes of meta realness. It's so meta that even it's meta moments are meta. Think of it as a meta double cheeseburger, each layer more delicious than the next.

Which is, to be clear, already the flavor of Oreos.

5 When 'Ghostbusters' Trolled Its Trolls

Remember when everyone on YouTube aggressively trolled Ghostbusters' first trailer? (BTW, "everyone" = straight white males.) The movie responded perfectly, by having its leading ladies read the comments section of their own ghost hunting video and come across the following gem: "Ain't no bitches gonna hunt no ghosts."

6 When Winona Ryder Was Cast in 'Stranger Things'

Stranger Things is a self-described "love letter to the '80s classics," and it doesn't get more '80s than Winona Ryder. Her casting is by far the series' most meta moment.

7 When Rae Sremmurd Did the #MannequinChallenge

8 Oh, and Then Paul McCartney Joined In

9 When Rihanna Wore a Shirt of Herself Wearing a Shirt

As Lorelai notes, Gilmore Girls is cleaner. And it's also more meta.

11 When Jessica Simpson Referenced "Chicken of the Sea"

Perhaps the single greatest moment of 2016.

12 When Kylie Jenner LOL'd at Herself

This year is just the year of ..

Remember the time Kylie profoundly mused that 2016 would be the year of "like, realizing stuff." Now she's wearing it on a shirt.

13 When the Creator of 'Full House' Bought the IRL House

Mehera Bonner Contributor Mehera Bonner is a news writer who focuses on celebrities and royals—follow her on Instagram.
Advertisement - Continue Reading Below
More From Culture
How the 'To All the Boys 2' Soundtrack Was Made
Does 'Bachelor's Madison Prewett Self-Eliminate?
Advertisement - Continue Reading Below
How Much Does 'The Bachelor' Make?
Tales of a Hollywood Con Queen
Who Will Be on 'Bachelor in Paradise' in 2020?
When Will 'The Bachelor' Women Tell All Air?
'The Bachelor' Has Already Finished His Season
The Very Best Rom-Coms of All Time, Ranked
An Investigation Into the Next 'Bachelorette'
The Best Korean Dramas to Get You Hooked