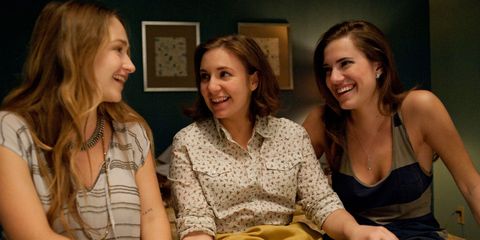 After six seasons, HBO's Girls is coming to an end this weekend. Writer-director-star Lena Dunham created characters in their early twenties who were struggling to figure out the contours of adulthood, and a major complication of that was determining how to make money. How to find meaningful work also, but firstly, how to make money.

Girls debut episode finds protagonist Hannah Horvath getting cut off financially by her parents, and even with that set-up (and all the other life lessons the girls accrue over the series), the characters never seemed all that interested in staying employed. To wit, a few of the gigs they tried and abandoned—broken down by character.

Shoshanna is the baby of the group, and as such spends a few seasons as a student at NYU. After struggling to find a job post-graduation, she becomes a campaign manager during her ex-boyfriend Ray's run for Brooklyn city council (a role which we never hear about again). Eventually Shosh accepts a job in marketing and social media at a company that transfers her to Tokyo.

After sorta-kinda getting fired, Shoshanna starts working as a waitress in one of Japan's famous cat cafes. The character disappears for a few episodes and then turns back up in New York later in Season 5, at which point she starts doing marketing work for her ex-boyfriend Ray's coffee shop.

In the end: Shoshanna has no job. She seems to have her life together—her style is cool and she's engaged—but that fiance must be packing fat wads of cash because she isn't otherwise employed.

As the show's most uptight character, Marnie starts out as an ambitious art-gallery assistant. She gets downsized at the beginning of Season 2, and lands a job as a restaurant hostess (which entails a goofy uniform). When Marnie's crush Booth Jonathan hits on her at work, she abruptly leaves and never comes back, eventually becoming his de facto assistant. Once she realizes Booth's not actually interested in dating her, she leaves and starts working as a barista at Grumpy's.

Marnie quits her barista role in a fit of rage, and starts working with Booth's old assistant Soojin to open an art gallery. This seems like a really good use of her experience and passions, which is probably why we never hear about the gallery again after opening day. She and her crush Desi play music as a folk-rock duo, and eventually get a record deal. We know Desi blows the (relatively) huge cash advance, but whatever happened to the actual record? Who knows. Either way, they decide to go on tour, and whatever happened to that tour? Who knows.

In the end: Marnie has no job. She accepts money to sing at her mother's friend's party, but otherwise doesn't have enough money to keep her New York apartment, and moves back in with her mom.

Jessa nailed the most unfortunate aspect of adulthood in her first season: "You know what the weirdest part about having a job is? You have to be there every day, even on the days you don't feel like it." Jessa rarely feels like it during the series, starting off as a lackadaisical nanny who quits after vibing too hard with the kids' father. After weeks of unemployment, she marries a rich financier and becomes a stay-at-home wife. It's a full season before she gets a new job, this time working at a children's clothing boutique. Bored there, she meets an eccentric elderly artist named Beedie, and becomes her archivist and caretaker.

After Beedie moves to Connecticut, Jessa enters another long stretch of unemployment. After many stints in rehab, she decides she wants to enroll in school and become a therapist. She begs her sister for financial assistance, which her boyfriend Adam finally offers. Though Jessa seems passionate about the field, her schoolwork goes unmentioned for a full season until we learn near the finale that she's quit. She serves as a film producer for Adam's directorial debut, a role for which she wears a business-y red lipstick.

In the end: Jessa has no job. Seriously, what happened to that film she and Adam made? The one that almost destroyed their relationship? It seemed like a stinker, but they still spent money on it.

After her parents cut her off financially, Hannah tries to get paid at her unpaid publishing internship. That doesn't work out so well. She eventually gets a job as a law firm secretary with a very creepy boss, and—as many of the girls do throughout the series—starts working as a barista at Grumpy's. She also freelances for jazzhate.com, for whom she experiments with cocaine.

In a major breakthrough, Hanna signs an e-book deal, but her editor dies of a drug overdose. A publisher expresses interest in a print book deal, but the book is stuck in legal purgatory due to her editor's death. Still, she lands a dream job at GQ... as an advertorial copywriter. Worried she'll have to compromise on her literary dreams, she quits.

In a move that she'll repeat at the end of the series, Hannah leaves New York City for college, enrolling as a graduate student the Iowa Writers' Workshop. She gives up on the prestigious program quickly and returns to New York to become a substitute teacher. Though she's actually great at this, she quits and returns to her passion, writing—eventually landing steady newspaper and magazine work as a freelance writer.

In the end: Hannah once again decides to leave New York City, this time to teach internet-writing to undergraduates upstate. Oh, and she's going to have the biggest job of all—mother!