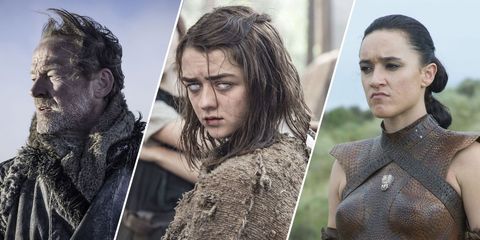 Making the fantasy of Game of Thrones come alive is harder than it looks. Even if Emilia Clarke doesn't have to ride a real dragon (although wouldn't that be the coolest?), her costars do have to ride actual horses. Or be submerged in water. Or crawl for hours. Or shoot a scene while blind. Ahead, GoT actors to tell us about their more challenging scenes—when the action called for them to do something scary, tough, or even a little dangerous.

"I know it sounds like a bit of an understatement, but when my character died, I was crawling, trying to imagine my lower half was totally paralyzed. And I had to do it 27 times. By the end of it, I was covered in sweat from exhaustion, by the time I got to the fire. So that sweat was real, because they shot me arriving at the fire at the very last, so I had been dragging myself by my upper body on the floor all day. I felt like I was the Hulk."

"Drowning after the kingsmoot, over and over. The kingsmoot is in the books for a whole chapter, but that's not possible to do on a TV show with so many beautiful characters that we need to follow. So it's a little bit different. The funny thing about that scene, I did that in September, and the drowning and resurrection took one or two days to shoot. When you're underwater, and there's a guy pushing you down, and it's very, very cold, it's one of those challenges that you have to accept as an actor: This is what it is. This is what we're going to do."

"The contact lenses when Arya goes blind were really uncomfortable. But they looked incredible! They looked great on camera."

"My death scene, which was shot over a few days. It was just me and Maisie [Williams], and my overriding memory was of darkness, because we started very early in the morning, and then I got prosthetics on both eyes, about 9 o'clock onward in the morning. I was completely blind. And I was blind until we finished at 9 o'clock that night. So it was in many ways quite a surreal day. It was very technical, but Maisie and I had worked it out in the rehearsals, and we were ready. And not being able to see helped with the vulnerability of the character in that moment."

"On Game of Thrones, one of the challenges has been wearing these beautiful, but really hot and heavy costumes. Especially if you're shooting in August. I often throw just cubes of ice in the back of my costume, because I can't just take it off. It takes longer to take it off than it takes to put it on. I've been begging them to use Velcro. Velcro, please! Thank you very much. But Game of Thrones wouldn't be Game of Thrones if they didn't go all the way. They want to use real stuff. No Velcro."

"There's a moment where the Sand Snakes, under the guidance of Ellaria, ambush Jaime and Bronn, to beat them at kidnapping Myrcella. Tyene, Nymeria, and Obara take on Bronn, and keep both of them from taking Myrcella, and also Obara takes on Jaime Lannister, which is totally a conversation that all three of the girls would have had before going on. Obara very likely would have said, 'Keep the other one off of me while I take the Lannister.' And I think one of the greatest moments is when Jaime and Bronn initially see these three girls, Bronn pulls out his sword, and there's a point during the fight where both of them have this realization like, 'Ooooh. These are the Sand Snakes.' But it was fantastic, and Nikolaj Coster-Waldau made us feel very welcome. It's a little bit daunting being in such a big production, with such a big cast, with a crew that's already so well-established. But we had a really good time."

"If we are fighting wights, what we're actually fighting is a stuntman in a green lycra suit. It's not scary, because you have a long time to film it, and it's very precise, because you have to match the timing when you do the fight over and over again for three days. But Isaac in that sledge, when I have to pull him through hell or high water, through snowstorms? That's pretty physically demanding. Which is great, because it pushes you."

"My prep for the torture scenes is all in the mind. Mental. Mental stuff going on in my head. So my preparation has more to do with what's going on in there. And I just watch stuff, like Reservoir Dogs, I watched that quite a bit. I thought Kirk Baltz was underrated. His ear...and pain—my job as an actor is to convey emotions that I experience in my own life and make that relevant to other people, and that pain is something you need to experience yourself, you know? So I just thought of the most painful things I could think of, and tried to exaggerate it, but it was hard. Really hard."

"Doing the gladiatorial fight in Spain, where Jorah had to take on all these various fighters in front of all these people, that was two weeks of very intense work, guided by our wonderful director David Nutter. But it took a great deal of preparation, and you're really at the mercy of how a director is going to shoot it, to see if he's going to leave you dead on the floor, or if he's going to find a way to shoot it multi-camera, so you don't have to do it all the time, from beginning to end. In the end, I really enjoyed that. I've always enjoyed stage fighting. But at the time, and running up to it, I was pretty fearful, thinking, I just hope I can do this. When it's that extensive of a fight—I was fighting various people with different weapons—things can happen. Accidents can happen. But we were blessed, and it all went well. I was very happy with the way it all turned out."

"When you fight people, that has some kind of logic. But when you have to fight wights, they just keep coming. There's no end to it. There's just trying to survive. That gives you a desperate feeling. What we did—because we couldn't choreograph every single kill—so Rowley [Irlam], the stunt coordinator, made up an alphabet for every one of us. We had seven movements we could play with. The stuntmen knew the language as well, so we just went for it. In the beginning, it was tough, but in the end it became a kind of horrible dance. It was extremely exhausting: They just kept coming, kept coming, kept coming. That was some great cardio training."