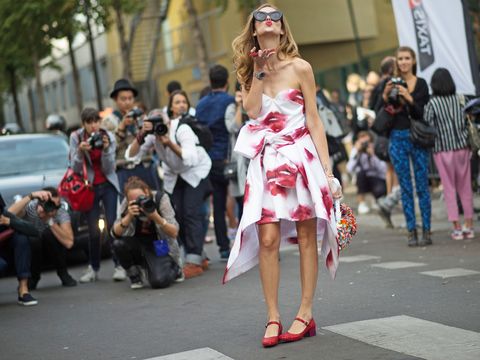 Infinite information is out there on fashion and what makes certain trends so appealing, which colors are best to wear, which pieces make the biggest impact. It's no secret that we're fascinated by the psychology behind our sartorial obsessions—and making style choices backed by science is what any savvy woman should do. But with so many facts and findings floating around the Internet, it's hard to apply it all to your real-life look.

To make it easier, WhoWhatWear compiled a list of five items that will make you instantly more attractive—all based on studies and surveys conducted by legitimate research teams. See these must-haves below, plus two more essentials we thought the list was incomplete without.

According to this study published in the Archives of Sexual Behavior, not only was heel height found to be directly proportional to a woman's attractiveness to men, but men were increasingly likely to exhibit helpful behavior and to spontaneously approach a woman the higher her heels were.

Black has been determined by many sources to be the number-one color associated with characteristics such as sexiness, confidence, and intelligence.

Thought breasts and butts were the only features men cared about? Think again. Researchers at the University of New South Wales discovered that men were highly attracted to women's shoulders and arms.

The color of passion, love and romance is a favorite of men for women and of women for themselves. Surprise, surprise. The Journal of Personality and Social Psychology just made official what we already knew.

While long limbs (as indicated above) are still high on the list of attractors, there's no denying the seductive appeal of a buxom hourglass figure. A paper published in the Archives of Sexual Behavior indicates that women with larger bust-to-waist and waist-to-hip ratios tend to catch men's eyes  faster and keep their gaze longer than their longer, lankier girlfriends. If you have those Kim Kardashian curves, flaunt them.

On a bad day, there's always lipstick. Nothing provides the instant pick-me-up quite like a swipe of your signature shade—and apparently others will respond to it, too. Researchers at a French university found that  waitresses who wore red lipstick saw boosted tips from male customers. Similarly, a study conducted by Boston University women wearing a moderate application of makeup were perceived as more attractive, competent, and trustworthy.

While not technically supported by any official study (that we know of), every fashion girl knows the power of a good pair of shades for making her look put-together and hiding tired eyes. Not to mention adding a touch of mystery and intrigue that's guaranteed to turn heads.

This content is created and maintained by a third party, and imported onto this page to help users provide their email addresses. You may be able to find more information about this and similar content at piano.io
Advertisement - Continue Reading Below
More From Fashion
Ballet Flats Aren't Just for Audrey Hepburn
Found: Long Pendant Necklaces You'll Wear Forever
Advertisement - Continue Reading Below
Irresistible Camisoles to Work Into Any Outfit
What to Wear This Summer
Meet Your New Daytime Bag: The Clutch
Khaki Pants Will Be Your Go-To Summer Trousers
Meghan's Sunglasses Are On Sale for Prime Day
Fashion Line Christy Dawn Designs for Mother Earth
Found: The Best Fashion Deals on Prime Day
27 Early Amazon Prime Day Deals to Shop