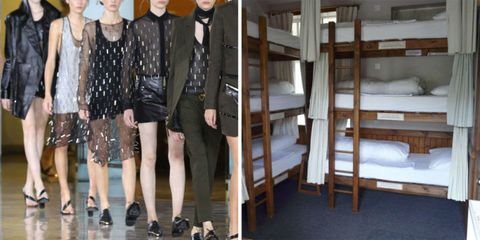 Nine former models have come together to sue their one-time agencies and seek damages for wage theft, breach of contract, and minimum wage violations, among other complaints, according to Gothamist. A lawyer for Click Model Management, one of the agencies named in the suit, dismissed the legal action as sour grapes from a bunch of supermodel wannabes, but Manhattan Supreme Court Justice Peter Sherwood isn't buying it and has directed Attorney General Eric Schneiderman to look into the claims, which are as numerous as they are upsetting.

1. Agencies intentionally withhold specifics about their models' finances. According to the suit, models are kept in the dark about just how much the agencies are being paid for their work, allowing the agencies to withhold funds owed to the models without their knowing, "unlawfully [diverting] millions of dollars in value from the models to themselves."

2. The models are misclassified as freelancers so the agencies do not have to provide them with benefits. It is not as if the models can just go work with whatever agency they want. The contracts they are forced to sign give their agencies exclusive rights to arrange modeling gigs for them, thus tying them to one particular agency. What's more, models are forced to check in with their agents multiple times per day and almost every aspect of the models' lives, from diet to hair to exercise to who they hang out with is controlled by their agents. In other words, they are the exact opposite of "freelance."

3. Agencies deduct supposed expenses from the models' paychecks without providing proof (i.e. receipts) that those expenses actually equaled the amount the agencies claimed they did. Model Vanessa Perron claims she was charged an unsubstantiated amount merely to keep her photos up on the website of her agency, Next Model Management. She was also charged the full cost of shipping fees for shipments containing materials meant for her as well as other models. Not a portion of the fees, but the fees in their entirety.

If this was happening to her, it was probably happening to all the other models as well, meaning a shipment containing materials pertaining to 10 models was being charged in full to all of them, creating a tidy, and illegal, profit of 900% for the agency.

4. Models are told that certain expenses will be covered so they agree to do the job and then, once the job is done, the agency will deduct those expenses from the models' paychecks anyway. For example, Perron flew to Australia to shoot an editorial for Harper's Bazaar Australia with the understanding that the magazine would pay for her flight. But, when she got the check from her agency, they had deducted the cost of the plane ticket from her payment. If this is true, it means that Harper's Bazaar paid for the flight, which is something magazines frequently do, and then Perron's agent deducted the cost from her check, effectively extorting money from both Perron and Harper's Bazaar by charging twice for a single flight.

5. Models are instructed to get plastic surgery and referred to specific surgeons by their agencies. Referrals often come with a kickback to the person or company making that referral—like when tour bus companies direct you to a specific gift shop or restaurant, and then earn a commission on whatever you spend there. If this is the case here, it would mean that the agents are able to compel a model to pay for plastic surgery and then collect a portion of the fee charged by the surgeon. In other words, the model is being tricked into paying her agent to get a surgery the agent is pushing her to get in the first place.

7. Models are forced to rent beds in cramped apartments owned or leased by their agencies at outrageously high rates. According to model Marcelle Almonte, in the early 2000s, her agency, MC2 Model and Talent Miami, charged her $1,850 per month for a spot in a two-bedroom apartment she shared with eight other models, each paying the same rate, sleeping four to a room on bunk beds, with the last girl forced to sleep on the couch.

According to the suit, the same building currently rents apartments starting at $2900 per month, meaning Almonte's agency was making as much as $13,750 more per month than today's market rate.

Given that many of the models in such apartments are underage, foreign, and classified as freelancers without a steady income, it is not as if they can rent apartments on their own at a reasonable rate. And even if a young model could get a lease, her agent could decide the next day to send her to another city or country and then she would be stuck with a lease on an apartment she wasn't able to occupy.

8. Agents tell models they will be paid by a client in clothing and accessories instead of money, but then these clothes and accessories never actually materialize. Even when the goods are delivered to the model's hands, these sorts of trade schemes put models at a particular disadvantage, since the items are selected by the designers themselves only after the work is done, which means the models are doing the job without knowing exactly what they will be getting in return. What's more, the designer determines the value of each piece, which allows them to claim that a hideous jacket the model doesn't even like is adequate payment for her work.

9. Agents exert extreme control over their models' personal lives, including who they date. Melissa Baker's agent apparently pressured her to dump her then-boyfriend, who was serving in the military in Afghanistan, and "replace him with an A-list celebrity or professional athlete."

10. Huge sums of money are never paid to the models and never accounted for. According to Baker, she often earned as much as $10,000 for shoots for clients like Ralph Lauren and Macy's, but only ever received a handful of checks for $5,000 or more from her agency.

11. When models push back against their agents and demand transparency and a proper reckoning of their wages, they are punished. Barker claims that when she pressed her agency about a big check she was supposed to have received for a Sports Illustrated job, her agency blackballed her by telling photographers who requested her for other jobs that she was all booked up and unavailable to work, despite the fact that she had no work at all.

This content is created and maintained by a third party, and imported onto this page to help users provide their email addresses. You may be able to find more information about this and similar content at piano.io
Advertisement - Continue Reading Below
More From Fashion
Anya Taylor-Joy Was a High-Fashion Princess
Kathryn Hahn Is Dressed to Perfection
Advertisement - Continue Reading Below
The Best Red Carpet Looks at the 2021 Emmys
Dior Photography Award Winner Shares Inspirations
We're Living for This Blast-From-the-Past Fashion
The Leggings You Want When the Weather Gets Brisk
Emily Blunt Is a Modern-Day Ziegfeld Girl
AOC Wore a Dress With a Stark Message
Ella Emhoff Is Fashion's Chicest It Girl
Serena Williams Glows In a Bodysuit and Feathers