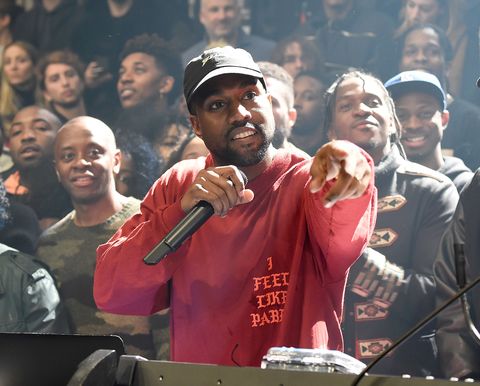 Kanye is gearing up for the presentation of his Yeezy Season 4 collection, set to debut on September 7 during New York Fashion Week. Yesterday, the rapper/fashion designer took to Twitter to share the details for the casting call, and they're even crazier than the "DO NOT ACT COOL" rules from Season 3.

It read: "Season 4 Casting Multiracial Women Only No Makeup Please Come As You Are"

Unsurprisingly, the specific ethnicity requirements of the open call—which took place today in New York City—caused more than a few eyebrows to raise. Many Twitter users shot back with angry comments about West's announcement, suggesting "multiracial" was just a subtle way of excluding dark-skinned women from consideration or that it perpetuates the idea that ethnic is desirable, but too ethnic is not. Others snarked at how exactly he planned to verify the ancestry of each aspiring model.

Here are some of the reactions and responses to Kanye West's controversial (what else is new?) casting call tweet:

multiracial only but watch kylie jenner be picked

gonna have his people check the DNA of all dark skin models when they come in. His color struck ass is gonna be so surprised. Lol

So like....how is he determining this? Is there a board to verify they multiracial?

Sarah Lindig Senior Digital Editor, Special Projects Sarah Lindig is the senior digital editor, overseeing special projects for Harper's Bazaar.
Advertisement - Continue Reading Below
More From Fashion
What to Wear on Your Wedding Weekend
And the Bride Wore...Whatever She Wanted
Advertisement - Continue Reading Below
Swap Your Veil for These Bridal Headpieces
Wedding Handbags for the Modern Bride
10 Modern "Something Blue" Ideas for Your Big Day
Unconventional Pearl Accessories for Any Bride
Chic Bridal Pantsuits for Any Wedding Event
Say "I Do" to These Chic Wedding Watches
A New Bridal Trend: Stacking Wedding Bands
The Best Non-Traditional Engagement Rings