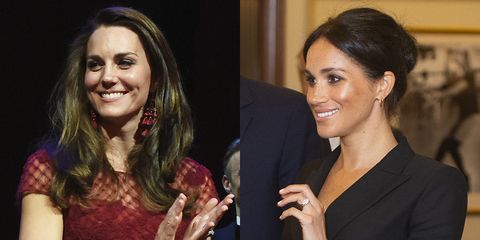 With Prince William and Kate Middleton and Prince Harry and Meghan Markle being dubbed the inseparable Royal Fab Four these days, the Duchess of Cambridge and the Duchess of Sussex have become increasingly close. They’ve provided each other with support and friendship since Meghan and Harry first began dating and, let’s face it, they're the only two people in the world who can really understand what the other must go through in their new, whirlwind lives as part of the royal family.

But, while the Duchesses undoubtedly have a lot in common, their individual sense of style has always been quite different. It’s never more apparent than when the two are side by side, but you can also spot the contrast when comparing what Kate and Meghan both chose to wear for similar appearances on their Duchess timeline. For example, their choices for theater-ready fashion could really not be more different, as illustrated when Meghan and Prince Harry attended last night’s Hamilton gala performance together.

The Duchess of Sussex opted for a black tuxedo dress from Judith and Charles with long-sleeves and a fitted silhouette. Her dress hit above the knee (quel horreur!) and was one of her most daring outfits to date. She looked modern and superbly on trend in the sleek ensemble, which she paired with Paul Andrew black heels and a golden metallic box clutch to provide a cool edge.

But, back in April 2017, Kate chose a completely contrasting aesthetic for her attendance at another London West End performance. Last year she appeared at a royal gala performance of 42nd Street, wearing an endlessly elegant, demure, and feminine crimson midi dress by Marchesa. It had capped sleeves and a flared fit that any Disney princess would be envious of, and the romantic, ladylike dress was styled with matching statement earrings and her signature, shining blow out.

Either way, they both look consistently stunning in their own, unique styles of dress. Plus, we all know that opposites attract when it comes to any kind of friendship—how many times as your friend looked amazing in an outfit that you'd never even consider?

Related Story
Shop Every One of Meghan Markle's Best Looks
Lucy Wood Contributor Lucy Wood spends most of her time writing about celebby things, reading books, and waiting for the glorious day that she have enough millions for a pet sloth.
Advertisement - Continue Reading Below
More From The Ultimate Guide to the Royal Family
Prince William Just Got a New Royal Title
Harry Felt Constrained by Royal Duties Growing Up
Advertisement - Continue Reading Below
Er, Meghan and Kate Haven't Spoken Since Megxit
Why Harry and Meghan Should Keep Their Protections
Why the Queen Canceled One of Her Annual Events
Meghan & Harry's Trademark's Been Blocked for Now
People Think Prince Charles Ignored Mike Pence
Meghan Markle's $65 Sunglasses Have Been Restocked
Meghan Markle Would Love to Be the Breadwinner
I Need Kate Middleton's Leopard Print Skirt