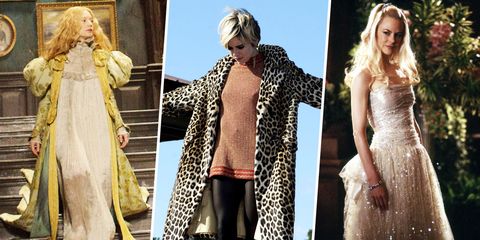 Now that you can curate (bleh) "Flixtapes" on everybody's favorite streaming service, there's nothing stopping you from making one with the above theme and addressing it "to me, from me." Because what greater gift *is* there than being able to switch your brain off to focus on what really matters: the fashion?

In this glitzy remake of the 1975 original, the aesthetic is all full skirts and headbands, and everyone is shiny and pneumatic. Also, Glenn Close's Bumpit game.

We saw this, but can't remember much more than that blood monster thing in the bathtub and being able to smell the incest from a mile away. (Plus Tom Hiddleston's butt.) However, costume designer Kate Hawley *killed* it with the pitch-perfect Victorian wardrobe, especially Mia Wasikowska's character's sweeping velvet robe.

Literally no one knows what this was supposed to be about—Is Richard Burton the Angel of Death or what?—but does that really matter when Liz Taylor's got the caftan collection of Rihanna's dreams?

Sienna Miller was good, but the rest...wasn't—minus her Edie Sedgwick togs, which could persuade a girl to go pants-less and cut a fashion mullet like no other.

Further evidence that we are living in the past: the off-the-shoulder tops. The bomber jackets. The Gucci-ish BERETS. Might as well dig up your turquoise necklaces now, fam.

Like the Scooby-Doo come alive and on the other side of the law, the Flawless Four are, and forever will be, #squadgoals.

If you're like, "Hey now (Hey now), this is actually a cinematic gem," we're totally on board—it's just bad in a brilliant way, as all Disney Channel Original Movies are. The styling on the other hand...See: Lizzie's matching T-shirt and knee-highs, those flower clips, the final concert look, Paolo's very timely old-school Gucci sleazeball look. 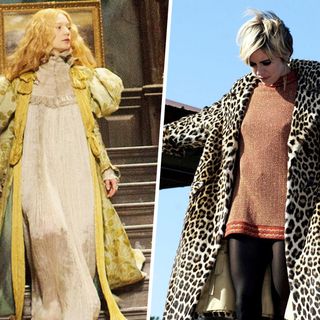