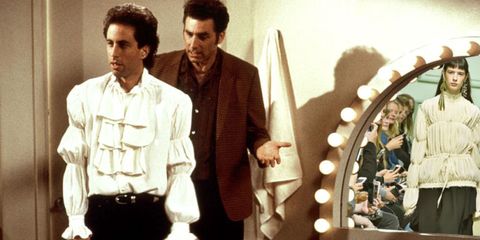 One time, when I went to class in a sailor-inspired 3.1 Phillip Lim top, I had a professor compare it the Puffy Shirt from season five of Seinfeld. It was not meant entirely as a compliment, but joke's on him. Because what was once a weak roast—what was once an object of humiliation—has officially become Fashion. #suckit

A more structured but no less extra version.

As a dress a pioneer schoolmarm would wear (if they could wear white out there before the invention of OxiClean).

Here, we've got the PS as worn by a rock-throwing suffragette who rides penny farthings in her spare time.

You know Elaine would crack up even harder if it were mauve like this. But WHO CARES WHAT YOU THINK, ELAINE?

Under an anorak, it's mainly just some sleeves and a well-proportioned built-in lobster bib.

With studs and a stand-up collar.

Fit for a pirate princess.

Simultaneously more streamlined and more detailed, as only Phoebe Philo can do.

I don't see how this could be unflattering.

Next
Proof There's No Wrong Way Wear a Leopard Coat

Advertisement - Continue Reading Below
This content is created and maintained by a third party, and imported onto this page to help users provide their email addresses. You may be able to find more information about this and similar content at piano.io
More From Fashion
Inspiring Mother-Daughter Owned Brands
Meet the Shoes You'll Live In This Summer
Advertisement - Continue Reading Below
The Clogs We're Obsessed With
Fashion-Forward Cable Knit Sweaters
The Leggings You'll Wear Around the Clock
Crossbody Bags You Can Wear With Everything
Our Fave Pearlescent Accessories
Your Search for a Good Pair of Linen Pants Is Over
Rainy Day Outfits to Make You Excited for Storms
Our Favorite Sunglasses for Summer 2021