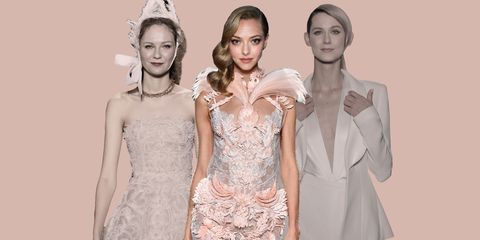 Yeah, agreeing to a lifetime of iron-clad commitment is kind of a big deal, but you only get one wedding dress per marriage once. For 10 celebrities about to walk down the aisle, we've got 10 outfit suggestions. (Mood boards upon request.)

She'll be as involved in the making of her wedding dress as she is with her tournament outfits, so chances are it'll be a bespoke affair when Williams ties the knot with Reddit cofounder Alexis Ohanian. For inspiration, she might look toward this scarlet Alberta Ferretti creation for its goddess-like cut and color, which would be gorgeous against her skin.

The first of two Atelier Versaces goes to the future Mrs.Mechanic, who would appear especially statuesque and radiant in this frilled, pleated number—though in a shade of white or metallic, like she usually prefers for the red carpet.

For Shayk, recipient of the next couture Versace and Bradley Cooper's hand in marriage, we've gone super slinky, as she likes, with feathers and beading galore. It is a special occasion, after all, and Donatella knows how to dress women.

The obvious choice would be something madcap from Jeremy Scott, but we get the feeling Miley and Liam would spring for a more grownup vibe. This twirly Chanel couture dress is still plenty plunge-y, though.

Amanda + Riccardo Tisci = match made in heaven. (Same for Thomas Sadoski.) With some modification—axe the chest plumes, add a lining—this blush Givenchy couture masterpiece is take-me-to-church-ready.

Girl secretly loves a big, poufy gown, despite her occupation usually calling for the opposite, so for her and Snapchat man Evan Spiegel's big day, we're nominating literal princess-dresser Elie Saab. Sparkle! Tulle! Frou! More frou! What else could she want?

In keeping with her body-con glam aesthetic, Longoria might spring for this Armani Privé we're pretend-outfitting her in, although, historically, she hasn't worn the designer before. (First time for everything.) As is, the tangerine would look spectacular—plus it's quite close to the shade she was wearing when fiancé Jose Antonio Baston popped the question in Dubai.

She *just* got engaged to Fargo costar Jesse Plemons, but Dunst has a long track record with white—and Dior. While there were heaps of pretty options from the house's couture show, we suspect she might choose something similarly lacy and minimally decorative.

Why not continue her message about non-mandatory dresses to marry bandmate Zach Villa? While she might also keep working with Altuzarra for this, she might also consider Brandon Maxwell, who cuts a lady suit like no other.

This is not Julia Stiles, we know. It is Natalia Dyer wearing an example of the type of custom daydream Prada or Miu Miu could whip up for the aughts icon when she says "I do" to camera assistant Preston J. Cook. Simple, clean lines with a bit of embellishment, like the house makes semi-regularly for the likes of Diane Kruger and Nicole Kidman.

Next
20 Celebrities Using Fashion to Take on Washington 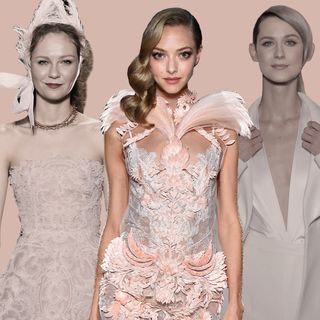