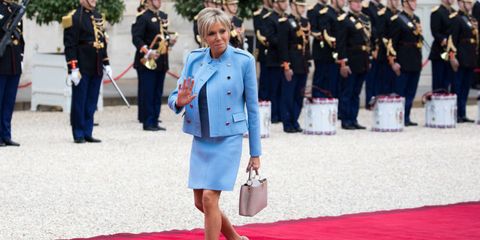 On Monday, Brigitte Trogneaux wore pow(d)er blue Louis Vuitton to see her husband sworn in as president of France. It was a chic choice, but as with all politically adjacent fashion, not everybody was happy (with the length of her skirt—maybe the critics could learn something from Amal Clooney). Here, an introduction to Trogneaux's and her predecessors' style.

The style: It was the '80s, and she certainly wasn't afraid of color—or embellishment.

Fun fact: Even as First Lady, she spoke out against human rights violations in China and Morocco.

The style: Lots of skirt suits! Some of which were pink, which was very prescient of her.

Fun fact: She comes from an old aristocratic family.

In 2007 during a speech given by her husband

The style: Molto fashUN, with loads of designer duds. (It might've helped that in a former life, she was one of the world's highest-paid models, walking for houses like Chanel.)

In 2008 at a conference in New York City

The style: Professional Woman, even while off-duty, with a touch of quiet glam. If it ain't broke...

Fun fact: She stayed on as a journalist with Paris Match magazine—even while her (now-former) partner was president of France.

In 2013 attending a Chanel show

In 2013 during a state visit from the German president

The style: Skinny, military-ish silhouettes from the likes of Louis Vuitton.

Next
Best Looks from the Panthère De Cartier Party 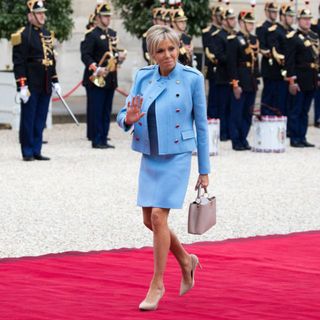