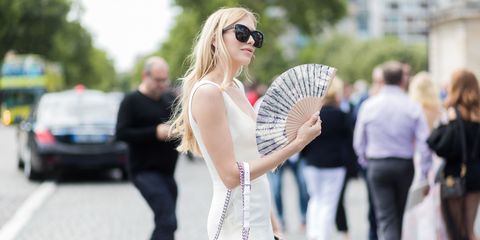 Let there be more fans. Not the selfie-taking, barrier-upending kind, but the breeze-making, ha-I'm-from-another-century kind. It's one more thing to wedge into your straw basket, sure, but well worth the two seconds of trouble when your train gets stuck underground and the AC malfunctions. Other pros: that satisfying THWAP sound, can function as an instrument of seduction. See seven inspiration photos below.

Or you could no-bag it for the breeziest summer outfit of all. In complementary pastels, an accordion fan to wave lazily in front of your face/smack other people in their faces if they're rude is the only accoutrement you need.

Really nice in brighter tones too.

At the Dior Haute Couture show, guests were gifted branded versions of the OG air-conditioners. Here's Kirsten Dunst with hers, looking chic.

Then, according to the tao of Céline Dion (short version: be as extra as you want), she got up and did a fan dance. (Not really, but would've been on-brand.)

Bianca Jagger and Alber Elbaz, two faves in one frame. Also, pretty sure Alber brought his own fan.

Chelsea Peng I'm Chelsea Peng, the assistant editor at MarieClaire.com.
This content is created and maintained by a third party, and imported onto this page to help users provide their email addresses. You may be able to find more information about this and similar content at piano.io
Advertisement - Continue Reading Below
More From Fashion
The Evolution of Engagement Rings
Score Meghan Markle's Bling at Missoma's Sale
Advertisement - Continue Reading Below
It's Time to Get Familiar With the "Shacket"
Jumpsuits: The Ultimate in One-Step Dressing
The Swimwear Trends to Expect In Summer 2021
Meghan Markle's Life in Photos
How Princess Eugenie's Wedding Dress Compares
Celebs Wore THAT to the Airport?!
The Most Iconic Shoe Moments in Film
The Slingback Heels You Need Now