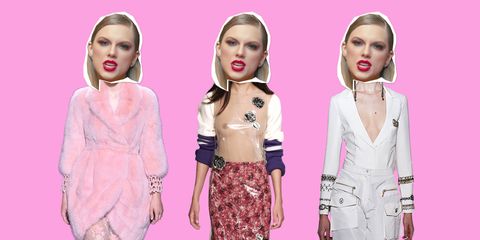 Why? Because the old Taylor is apparently dead and so, we imagine, is her wardrobe. As Taylor 2.0—who Googles herself, does choreography, and holds a grudge like no other—plots her resurrection, we're throwing in our two cents in the form of 10 gutsy, gorgeous runway looks that'd suit Her LWYMMD-ness just fine.

Given her furry "Rep" sweatshirt from the video, New Taylor doesn't seem to care about PETA launching tofu pies at her. She doesn't care about anything now! So bring on Fendi's rich-girl coat, finished off with a pompom in one of the 16 hair looks she's got at her disposal.

Another takeaway from the "LWYMMD" visuals: Taylor 2.0 is sexy! She can also dance sexy! No guarantees on how low one could conceivably drop it in such an abbreviated mini, but with those embellished ruffles, everybody will be watching her arm movements as she busts out some sick rhymes instead. Though what are wardrobe malfunctions to New Taylor? LESS THAN NOTHING.

New Taylor is STREET (especially when her fans call her TSwizzle). To fit that new, edgy brand, here's a jumpsuit with large leg holes and pockets with zippers on them. Real cargo pants would be too much of a departure—Old Taylor might be dead, but we wouldn't want to dance on her grave, would we?

Advertisement - Continue Reading Below
5 of 10
Dundas

Someone's been watching Game of Thrones. (See: snake throne.) I don't think we've ever been exposed to this much of any Taylor's sternum before, but under new management, anything is possible—plus voluminous sleeves make it all the easier to...swish, swish.

Gucci isn't just for making cutting commentary on your previous choice to abstain from streaming services—it's for all occasions! Though she's had a taste of the disco-glam side of Alessandro Michele's aesthetic, NT might further dabble in the madcap, Royal Tenanbaums-go-to-Coachella dimension of it.

Will New Taylor free the nipple? Can't say, but this would be the way to do it.

Advertisement - Continue Reading Below
8 of 10
Givenchy

She hasn't worn the Kimye-favorite brand before, so this would be a bit of a coup. But mask or no deal, okay?

Possible squad defector Cara Delevingne wore this on her Valerian promo tour, but what better way to really drive the "you're no longer welcome at my July 4 parties" point home than by wearing the same thing? The whole playground goes "Ooooooh."

Advertisement - Continue Reading Below
10 of 10
Monogram

But why waste time leaving more axed squad members' names off her Junior Jewels T-shirt when this one comes with a washable marker? Efficient. Deadly. New Taylor™. 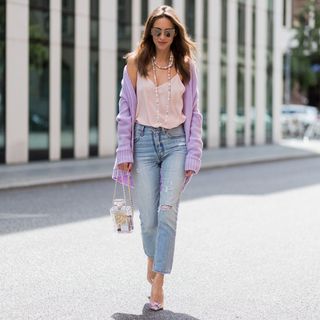 Advertisement - Continue Reading Below
This content is created and maintained by a third party, and imported onto this page to help users provide their email addresses. You may be able to find more information about this and similar content at piano.io
More From Fashion
Hats That Will Make a Statement—In a Good Way
The Most Exciting Jewelry Trends for Fall 2021
Advertisement - Continue Reading Below
Maxi Dresses That Work for Every Occassion
The 100 Best Shopping Sites to Browse Through
The Perfect Vests for Layering
How to Make White Sneakers Look Brand New
Colors of Fall You're About to See Everywhere
Madewell Is Selling Their Old Jeans on ThredUP
Jean Jackets You'll Live In
Wide-Leg Jeans Are About to Be Your Favorite Denim