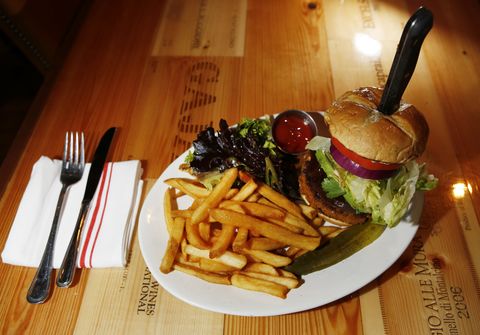 The good people of Reddit are sharing their deepest, darkest secrets from working at some of our favorite chain restaurants, and spoiler alert: It's not all great. If you've ever eaten at Applebee's, Chipotle, or Panera, get ready for some former employees who are here to deliver some harsh real talk. Please note, I haven't verified any of these claims, so believe at your own risk and, as always, since it's Reddit, [sic] throughout.

1. Applebee's: "I used to be a waitress at Applebee's. I would love to tell people that the oriental chicken salad is one of the most fattening things on the menu, with almost 1500 calories. I cringed every time someone ordered it and made the comment of wanting to 'eat light.' But we weren't encouraged to tell people how fattening the menu items were unless they specifically asked.

Also, whenever someone wanted to order a 'medium rare' steak, and I had to say we only make them 'pink' or 'no pink.' That's because most of the kitchen is a row of microwaves. The steaks were cooked on a stove top, but then microwaved to death. Pink or no pink only referred to how microwaved to death you want your meat."

2. Panera: "Panera is pretty much just as bad for you as McDonald's. People come in thinking they're eating healthy, but they're really not.

The Italian Combo used to have more than a thousand calories, but they took some stuff off so it's 980 now. All the soups have >1000mg of sodium (Italian Combo has >2000mg or a day's worth). A You Pick Two with Broccoli Cheddar, Frontega, and bread on the side is not significantly different from a McDouble with medium fries.

And the 'fresh-squeezed lemonade' is made from cartons of concentrate and regular old faucet water. Green tea is the same."

4. Taco Bell: "I worked at taco bell in the mid-nineties. The beans were dehydrated and in plastic bags like coco pebbles cereal. There were always two big pots of hot water. One pot was to add water to the beans, and the other pot was for heating the bags of ground beef, chicken, and steak. Also, I worked the closing shift. When we closed the lobby, we'd get beer and put the bottles in the ice machine. We paid for the beer by making up prices at the register and never ringing it up. When we had enough for beer we'd operate normally again. I never saw anyone do anything to the food. I still eat taco bell."

5. Updated Taco Bell: "I worked at a Taco Bell about 5 years ago, I dont know anything about a meat tube. When I was there we had 5lb bags of ground beef, they get tossed in this machine filled with hot water and heated for like 30 minutes or something. Also, the cinnamon twist things, look like little opaque pastas before we would cook them. We would close the lobby at 10-11pm; I don't remember and we would smoke and play cards in the lobby all night between orders. I was the shift leader at night, and the restaurant was brand new when I worked there, and we scrubbed that kitchen top to bottom every night. Also, if there is a ton of meat like steak or chicken left over, it was called carryover, and was put on ice, and used first thing in the morning, but the ground beef would get thrown away. I was surprised at how seriously Taco Bell takes their restaurants, We had inspections at least once a month, someone unbeknownst to us, would drive through, and check the food and make sure it was wrapped correctly, check it for accuracy and speed of service. We had a timer above the drive through, our target during the lunch time rush, was 2 minutes, but most times it took around 4 minutes from speaker to delivery of food. Im not sure if it was just the company that owned the particular taco bell I worked at, or what, but they ran it very well. They even paid for me to attend a certified professional food managers class and got a certificate for it."

6. Chili's: "The molten cake that everyone seems to love is frozen. The paradise pie is frozen. If you complain that your food isn't hot enough, it just goes into the microwave. Oh, and people used to ask for the queso recipe all the time...it's delivered to the restaurant in a bag. The cooks would just heat it up and dump it in a skillet.

When the dishes came out of wash, there would still be wet lettuce and food particles stuck on the plates and silverware, and we'd just wipe it off. Makes me want to use plastic ware at every restaurant now."

7. Olive Garden: "The servers are in charge of making bread sticks at Olive Garden. I can't remember exactly how it worked but all the soup/salad/bread sticks were done by the servers. Two servers would usually be scheduled to be in charge of those things. I can't remember if the breadsticks were frozen or fresh...but I think they were fresh. As soon as they came out of the oven they were slathered in butter and salted, and they usually didn't last long. So chances are the breadsticks you get at Olive Garden are gonna be fresh and tasty. We were told that a table gets one bread stick per person and then one extra...this did not help curb massive consumption of bread sticks.

Once we had to throw out a bunch of old boxes...one of which I managed to take home. I ate bread sticks for at least a month...it was glorious."

8. Starbucks: Just started working at Starbucks. I accidentally brewed decaf instead of regular. After fixing the problem, I notified the girl training me that I wasted two scoops of the decaf and she laughed and said, "You should have just left it. I do that all the time -- on purpose. The customers can't tell the difference."

Although please let me say that I worked at Starbucks for many year and we never would have let that slide, so let's hope this trainer is an anomaly because serving decaf to people who want regular is the work of the devil.

9. Domino's: "Former Domino's Employee here. Something that I didn't realize was that your delivery driver gets paid $3.15 an hour for all the time spent on the road. Please tip well. They do not get reimbursed for gas and are using their personal cars. If your pizza was late, it is much, much more likely that it was the manager's fault (the managers are the only ones allowed to make the pizzas). You work shitty hours and there is absolutely no way you are getting a Friday or Saturday night off because that's when everyone wants pizza. They will most likely be working from 5pm to 2 or 3am on those nights and then if you're opening the store on Sunday, you'll be back at 11am.  Domino's isn't even good."

Laura Beck Laura Beck is a Los Angeles-based TV writer and frequent contributor to Cosmopolitan.com — her work has appeared in the New York Times, New Yorker, Jezebel, and the Village Voice.
Advertisement - Continue Reading Below
More From Food & Cocktails
50 Easy At-Home Vodka Cocktail Recipes
Costco Is Refusing Returns On High-Volume Items
Advertisement - Continue Reading Below
The Delicious Drinks on Starbucks' Secret Menu
Be Fancy, Sip a Vermouth Cocktail
The Tastiest, Fanciest New Year's Eve Cocktails
Elevate Your Next Toast With a Champagne Cocktail
91 Drinks to Get You in the Holiday Spirit
The World's Largest Starbucks Is Opening
Starbucks' Holiday Cups Are Back In Stores
Found: 12 Delicious, Affordable Champagnes