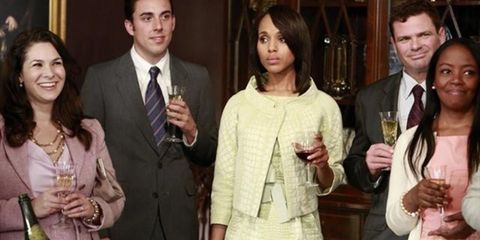 Chances are you've heard that drinking wine in moderation can promote heart health. (And except for the moderation thing, this is not a hard sell.) But a recent study conducted by researchers at University of Gothenburg in Sweden suggests the benefits of booze may not apply to all.

In the study, researchers assessed the alcohol intake of 618 people with a history of coronary heart disease who were involved in a 3,614-person Swedish study designed to identify chronic diseases' risk factors. The experts also conducted blood tests to see which participants had a particular genotype (aka "cholesteryl ester transfer protein polymorphism," JFYI). For unknown reasons, this genotype appears to affect how the body responds to alcohol, says lead study author Dr. Dag Thelle, professor of cardiovascular epidemiology at University of Gothenburg.

The thing is, only about 15 percent of people are born with these special genotypes, and there's no easy way to find out whether you have the genes that seem to make alcohol even more ~*mAgIcAl~*.

The bottom line: Experts aren't convinced that moderate drinking will protect everyone's heart health. Until more research is done, you can still toast to your health in moderation, Dr. Thelle says. Just cap your alcohol intake at nine drinks per week to max out on the benefits of a good buzz without jeopardizing your health.

Related: Alcohol and Calories: Does Drinking Cause Weight Gain?

Related: Red Wine and Chocolate Aren't Actually That Good for You

From the editors of

Elizabeth Narins Senior fitness and health editor Elizabeth Narins is a Brooklyn, NY-based writer and a former senior editor at Cosmopolitan.com, where she wrote about fitness, health, and more.
Advertisement - Continue Reading Below
More From Health & Fitness
What Staying Awake for 36 Hours Does to Your Face
The Best Workout Apps for Women Who Want Results
Advertisement - Continue Reading Below
The Mental Health Apps Professionals Recommend
How to Be More Spiritual in 2020
Sleep Supplements for Sweeter Dreams
Are New Year's Resolutions Still a Thing?
Gifts That Will Delight and Destress
Products Every New Mom Will Love
Found: The Best Running Sneakers
Debunking the Dangerous Hymen Myth