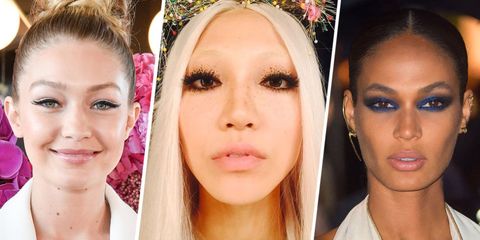 Getty, Instagram
Never trust the instructions on the back of eyeshadow quads because, like Bed Bath & Beyond towel displays, they are there to deceive you. Why don't you frame your lower lash line with a half-rainbow instead? Add a white layer to your outer-corner flicks? These creative looks most *definitely* did not come from some makeup packaging, and for that, they're worth the little bit of uncertainty.
Getty
1 of 7
The Rainbow Shadow

This could have gone super wrong, but Angie Harmon's fresh skin and pulled-back hair keep it from going into tacky territory. Also, note how the colors blend seamlessly into one another.

Getty
2 of 7
The Undereye Dots

Anna Sui Fall 2012 will forever have a spot on our mental moodboard, and that is because of the two dots Pat McGrath placed directly under each pupil. Here, Zoe Kravitz reimagined the look in subtle black, sans the original cat-eyes. Well done.

Getty
3 of 7
The Double Feline Flick

For extra coolness without much extra effort, trace the top edge of your flick with white liquid liner à la Gigi Hadid. Bonus: deets on the hair.

Getty
4 of 7
The Animé Eyelashes

Last time we discussed this Chanel resort look, the focus was on the brows. Now, we're talking about the graphic, doll-like lashes, for which a convenient real-life tutorial exists here. (See #7.)

*So* fierce, *so* modern. Sir John, Joan Smalls's MUA here, told Style.com all about the eyeshadow equivalent of Dior's New Look: "Above the crease and on the brow bone, there's no shadow—it's clean."

You know how when you're applying mascara and you kind of accidentally, messily tightline? This is that but more controlled. To recreate, Sir John recommends brushing on four (!) coats of L'oréal Paris Miss Manga Mascara on top and bottom lashes; for the confetti, you can either stipple using black eyeliner, or, if you're more daring, carefully tap with the mascara wand.

Getty
7 of 7
The Angled Smokey Eye 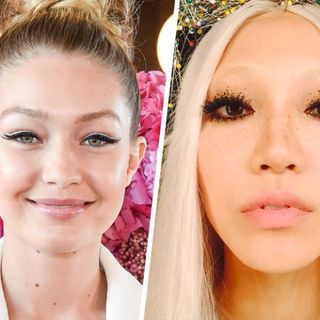