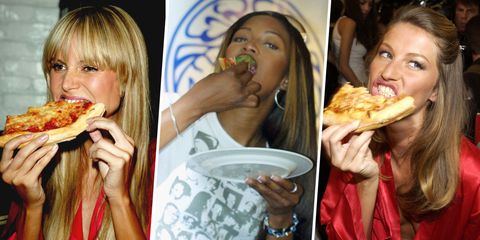 The 2016 Victoria's Secret Fashion Show airs tonight, which means us mere mortals need a reminder that despite appearances, models are just like us. LOL, kidding. The only real common denominator between us and supermodels is an insatiable appetite for pizza. Whether they're backstage at a fashion show or living their everyday lives, models cannot resist a hot, oozing cheese slice.

While getting her hair did backstage at Donna Karan, Gaby went HAM on a slice.

Only a personal pie will do for Cara Delevingne🍕.

Leave it to Delevingne to express her love for pizza not just by eating it, but by wearing it.

The Brazilian bombshell is a pioneer in the pizza-backstage-at-the-Victoria's-Secret-show game.

Klum is an attack-from-the-side kind of pizza eater. The anxiety of pre-VS show will do that to a supermodel.

Flatbread pizza with a side of birthday suit, anyone?

"What happens when your shoot wraps at 1 am 🍕🍕🍕 😁," according to one Victoria's Secret model.

Smith will be the first to tell you that she's "in a committed relationship w/pizza."

Pepperoni and black olives? We like your style, Roitfeld.

The Aussie isn't afraid to tuck into a slice during hair and makeup.

Jenner chowing down on the 'za with sister Khloé.

At the VS show, Tavares evaded Billy Bush's questions by devouring a slice. Respect.

Proving that models and pizza is an international phenomenon, two models chow down during Mercedes Benz Fashion Week Istanbul.

Yes, even Naomi too! 🍕 will not be stopped.

Windsor knows the only way to survive Coachella is with sunglasses, SPF, and pizza in tow.

Eeeeats champ Teigen commands extra hot red chili flakes. Do not deny her this or you will pay a dear price.

Next
The 10 Best Eyeshadows You Need to Try Now 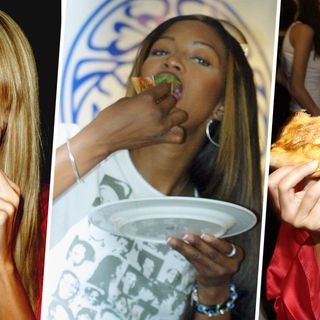