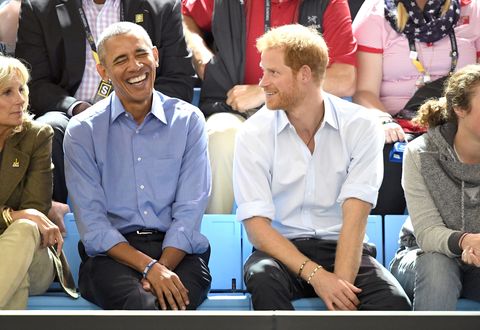 Prince Harry and Barack Obama looked like the oldest friends in the world—just look at their mirroring body language and the size of Obama's smile—as they sat next to each other at the Invictus Games over the weekend.

And apparently, the former president even grilled Harry about his Suits star girlfriend Meghan Markle (once they had stopped sharing jokes, of course).

Student Hayley Stover was seated next to Harry in the absence of Markle during the U.S.-France wheelchair basketball match on day seven of the event in Toronto on Saturday, and overheard their conversation.

"Obama asked about Meghan and Harry let him know she had been to watch the tennis with him,' 18-year-old Stover told the Sunday People. "He asked if she was enjoying the Games and Harry was really smiling as he said yes. He looked so happy. It was cute."

"Obama also asked about her filming the TV series Suits and how it was going. Harry asked Obama about his wife Michelle and how she was doing. Then he said, 'Send my love to Michelle.'"

She added: "Before they arrived I sat where Harry ended up. A security guard asked, 'Do you mind moving along one, as this is where the prince will sit?' I said, 'Sure thing', but I was thinking, 'Oh my God.'"

Meanwhile, Prince Harry and Markle were pictured enjoying a sneaky kiss at the closing ceremony on Sunday.

The 33-year-old royal left his official seat on the opposite side of the Air Canada Centre to join the 36-year-old actress and her mother, Doria Radland, who were standing in a box in the stadium.

Love is all around...

Naomi Gordon Naomi Gordon is news writer mainly covering entertainment news with a focus on celebrity interviews and television.
This content is created and maintained by a third party, and imported onto this page to help users provide their email addresses. You may be able to find more information about this and similar content at piano.io
Advertisement - Continue Reading Below
More From Celebrity
Chrissy Teigen Shared a Sweet Video With Luna
EmRata Displayed Her Bump in an Open Button-Down
Advertisement - Continue Reading Below
Harry Sent a Legal Warning Over "False" Article
Chrissy Teigen Talked About Her Baby Loss Photos
Chrissy Teigen Opens Up About Her Loss
A Look Back at Gwen Stefani & Blake Shelton's Love
Serena Williams Shows Off Toned Body In BTS Photos
See a Romantic New Photo from Beatrice's Wedding
Harry Was Treated as a "Spare" by the Royals
Cardi B Called Out Racist Reactions to Her Birkins