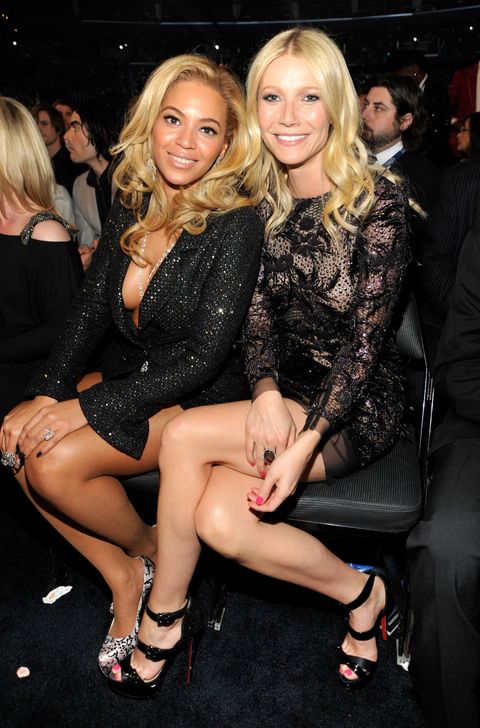 Update, 1/16: In other news that's related to Gwyneth Paltrow but not Gwyneth Paltrow's love life, the Mortdecai actress said she enjoys being friends with Beyoncé and Jay Z because 1) they too understand what it's like to be famous and 2) that way, she can hang out with Blue Ivy.

"Obviously I'm not as famous or successful as they are," the Oscar winner said during her appearance Thursday on Watch What Happens Live. "But I do have a life in the public eye and I have people to sort of walk through life with in that capacity, and they're very kind and loving people."

Then she goes on to spend relatively much more time singing the praises of their 3-year-old daughter, whom she calls "a powerhouse," "the boss of everything," and a literal tiny dancer who "can do all the choreography to Sia's 'Chandelier.'"

Update, 1/15: Gwyneth is aware of Chennifer/C.Lawr, and she doesn't hate it.

In the same Howard Stern interview in which she evaluates her past relationships, Paltrow answered a question about what she'd do if, say, Chris Martin was "theoretically" dating Jennifer Lawrence.

"Who says I don't approve? Why not? Why is it going to be an issue? I respect him as the father of my children. It's his life and it's his decision and I do think that he loves the kids so much, and I don't think that he would be with someone that wasn't great. And if I'm wrong, I'll come back here and I'll tell you."

Original post, 1/14: Back in the mid-'90s, pre-Angie and Jen, Brad Pitt was Gwyneth Paltrow's fiancé, the sexy, platinum-blonde dude whom she dated for three years. Pitt was "so gorgeous and sweet," Paltrow recalled on Howard Stern's SiriusXM radio show this afternoon. "I definitely fell in love with him." Then, by her own account, she blew it because she was too busy being absorbed in her Goopy self. Imagine that!

"I was such a kid, I was 22 when we met. It's taken me until 40 to get my head out of my ass." Marriage was something she was just incapable of at that age, she continued. "You can't make that decision when you're 22 years old. I wasn't ready, and he was too good for me." Hey Brad, if you still need that "it's not you, it's me" closure, there it is.

Paltrow then went on to provide essentially Lulu-level reviews for her other exes. Ben Affleck, whom she dated from 1997 to 2000, was less stellar. "He was not in a good place in his life to have a girlfriend." And that guy after, ex-husband Chris Martin, she only made one mistake with: using the words "conscious uncoupling" to describe their separation last March. "I didn't give it context. But it is a goofy term." Well, it only took her nine months to realize it.