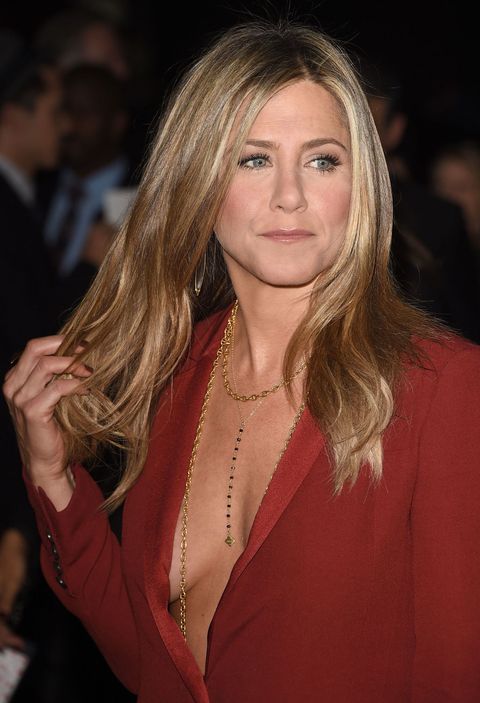 Jennifer Aniston may not get to add "Oscar-nominated actress" to her resume yet, but she does get one new title: biggest snub.

She appeared on Ellen to promote her buzzed-about role in Cake, and she reacted to the news that she wasn't up for the big prize. "I'm the number-one snubbed," she joked to Ellen DeGeneres. "That's the silver lining, right?"

Aniston can console herself knowing she was nominated for a Golden Globe, Critics' Choice, and a Screen Actors Guild award for Cake, in which she plays a woman suffering from chronic pain. Plus, she already has a Globe and an Emmy for that little show she did called Friends. You really shouldn't feel bad for her.

And all this outrage over her Oscar snub is the perfect publicity to promote Cake, which hasn't even hit theaters yet. "We're so shocked and amazed that we've had this much love at all for a movie that hasn't even been released yet," she said.

Aniston does have some competition for the "number-one snubbed" honor, though. Selma director Ava DuVernay and star David Oyelowo missed out on nominations, as did Nightcrawler's Jake Gyllenhaal. And don't forget The Lego Movie, which caused an uproar online after it was ignored for Best Animated Feature.

Jennifer Aniston and Kristen Stewart Are up for Razzie Awards (Womp)...but Actually Not the Bad Kind (Yay?)

This content is created and maintained by a third party, and imported onto this page to help users provide their email addresses. You may be able to find more information about this and similar content at piano.io
Advertisement - Continue Reading Below
More From Celebrity
Duchess Kate Wears a Sleek Green Blazer
Meghan & Harry Update Archewell Website
Advertisement - Continue Reading Below
Will Is in the Dark About Sussex/Oprah Interview
Oprah Says Her Sussex Interview Is Her Best Ever
Chelsea Handler Skied Naked for Her 46th Birthday
How Kristen Stewart Is Prepping to Play Diana
How to Make the Queen's Favorite Cocktail
The Queen Told Harry to Uphold His Family Values
Twitter Is Thirsting over Prince Harry
Gabrielle Union Just Wore a Daring 2000s Trend